Pour Me Another Kentucky Coffeetree 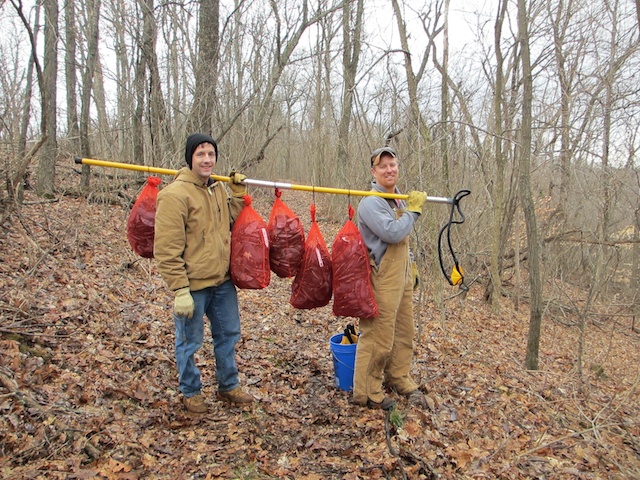 When you think of plant hunting—Indiana Jones style—you usually think of faraway places. Throw in tall mountains, deep ravines, landslides and feuding warlords, and you might soon forget the plants. The story becomes more about the adventure.

Andy Schmitz and Jeff Carstens haven’t been to China or India, but they found enough adventure closer to home in early March to keep them entertained.

The two Iowans hit pay dirt on their eight-day mission to find fruiting, female Kentucky coffeetrees in Kentucky, Indiana, and Illinois. Tracking tips and herbarium records, they targeted and sampled nine, widely scattered sites of age-old coffeetrees found growing in association with pawpaws, blue ash, chinquapin oaks and hackberries along river and creek bottoms—and, even more rarely, on a few ridge tops.  They’ve got a 600-pound haul of seedpods to show for their efforts. One of their discoveries, in Griffith Woods in Harrison County, Kentucky, measured an impressive 120’ tall, which Schmitz nominated for Kentucky state champion status. Official recognition was granted earlier this month.

Kentucky coffeetrees comprise a very small percentage of the woody flora throughout their native range from central Ohio west to central Oklahoma and from Iowa to northern Arkansas. The Brenton Arboretum (where Schmitz is Director of Horticulture) and the National Plant Germplasm System (where Carstens is Woody Landscape Plants Interim Curator) are teaming up to preserve the coffeetree’s genetic diversity.  In the near future, the Brenton Arboretum, in Dallas Center, Iowa, will have the largest, living collection of this increasingly rare wild species. 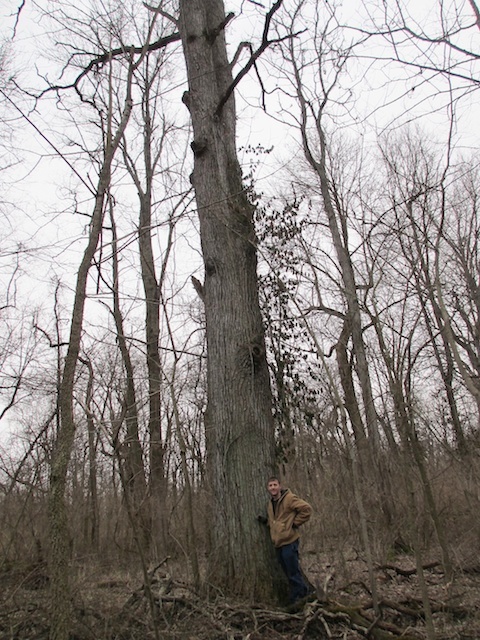 In addition to the living collection at the Brenton Arboretum, seeds of Kentucky coffeetree are being deposited with the North Central Regional Plant Introduction Station (NCRPIS) seed bank in Ames, Iowa.  The Plant Introduction station is part of the National Plant Germplasm System  that strives to conserve diverse plant genetic resources, provide them for research purposes, and encourage their utilization.

The Kentucky coffeetree has barely kept up with the times. Author and woody plant aficionado Mike Dirr called the species one of his “top noble trees,” but that wasn’t enough to resuscitate landscape interest in a forsaken species. Schmitz and Carstens are re-booting Kentucky the coffeetree, sampling and characterizing populations to better understand the variation that may be useful for ornamental landscapes, as well as to conserve genetic diversity. 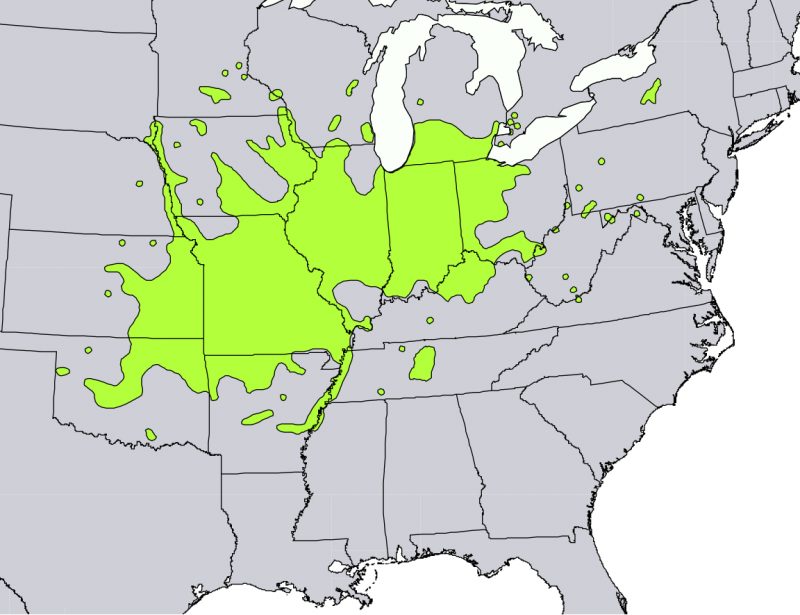 Gymnocladus dioicus had its last heyday in the Pleistocene epoch, when large herbivores roamed North America.  Mastodons and rhinos gnashed on hard seedpods to reach the sticky pulp and seeds. These beasts lumbered along while digestive enzymes worked magic, breaking down seed germination inhibitors.  The seeds, excreted in a pile of dung, eventually germinated and the future of the species was ensured.

That doesn’t happen anymore. It remains questionable whether existing wild and/or domesticated animals eat these seeds.  Now trees grow near where seeds drop, as seeds aren’t moved the distances that mastodons and rhinos might have traveled. When seeds do germinate in the wild, often two or three years’ time is required to break their hard, physical dormancy.

Though poisonous to humans when eaten raw raw, native Americans used roasted seed for nourishment. And early Kentucky settlers brewed a crude coffee substitute that probably tasted no better than a pot of three-day-old truck stop java. The frontier brew didn’t catch on.  There are, however, very good reasons, why the tree is coming out of shadows for its valuable landscape potential.

The Kentucky coffeetree Gymnocladus dioicus is durable, easy-to-grow, cold-hardy to Zone 4, and tolerant of salt and pollution. The foliage has magnificent deep green bipinnately compound leaves. Other notable ornamental qualities include yellow fall color and coarse-textured bark, plus the decorative, dark brown seedpods. Its adaptability to urban conditions, alkaline soils and drought, with no serious insect or disease problems, make it a strong contender to replace ash trees decimated by the emerald ash borer and oaks afflicted by oak wilt.

The coffeetree, along with hickories, is one of the last native Kentucky trees to leaf out, and it drops its leaves early. The Greek gymno cladus translates to naked branches, an honest description of the tree’s bare but stylish silhouette for nearly six months of the year. The hard pods on female trees persist throughout the winter, offering a visual key to identification. The large dark brown, leguminous “megafaunal fruit” look like an attractive small version of the seedpods of the tropical Royal Poinciana. 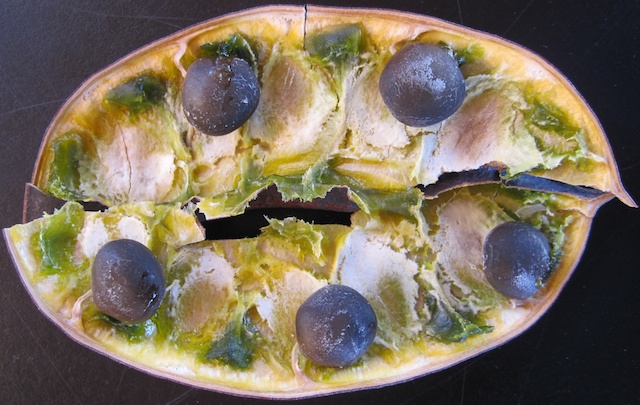 Though I love the seedpods, many might prefer a seedless male clone for landscape use. Gymnocladus dioicus ‘Espresso-JFS’  Espresso™ is in the trade and you might have to do your own plant hunting to locate the scarcer cultivars – ‘Kentucky Colonel’ and ‘J.C. McDaniel’ Prairie Titan®.

Schmitz envisions a renaissance Brenton Arboretum collection of 80 or 90 trees from across its native range. The American Public Gardens Association, with high standards for collection management, is the arbiter of the North American Plant Collections Consortium. “If we could be on this list, it would set us apart,” Schmitz said.

The Brenton Arboretum would be open to researchers interested in studying Kentucky coffeetrees from documented provenance accessions. Should some of the remaining wild populations disappear, where these collections have been made, seed-banked material at the NCRPIS station could be utilized to restore areas with locally adapted Gymnocladus.

Andy Schmitz likes adventure. “I wouldn’t mind going to China or India,” he said. “It would be fun to collect over there.” He and Carstens know that in order to know what’s out there, you have to go out there.  But you don’t have to go far afield.  “There are lots of rare plants in our backyard,” Schmitz said. But it takes extraordinary hard work and commitment to promote and preserve them.