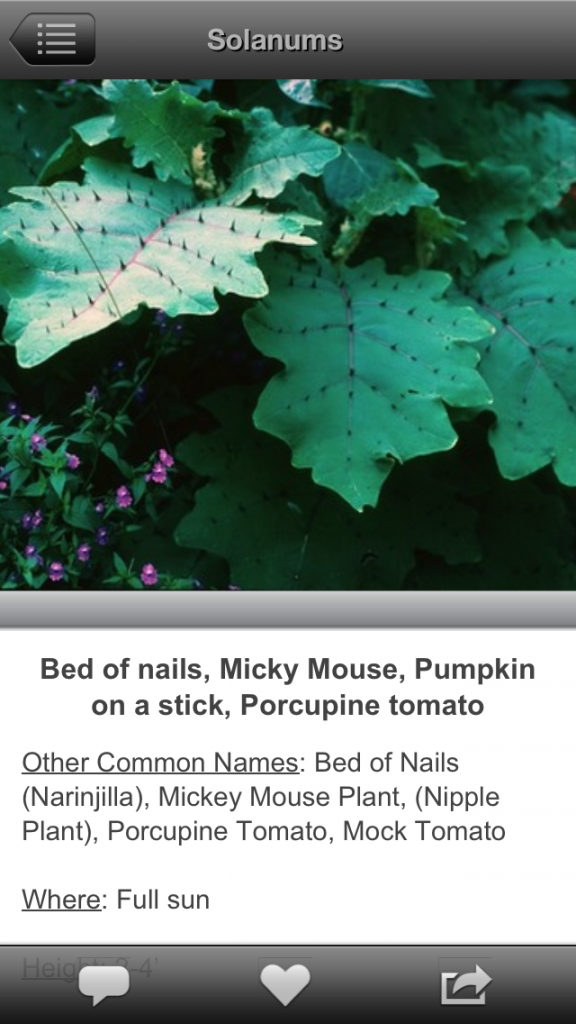 In the early days of the iPhone, we were ravening for gardening apps.  After a while though, the craving just seemed to go away. I have several theories on that. It could be that our devices have become so essential to the tasks of multi-level communication, social media, mapping, and other things we do every single day, the other stuff just fell away. I have dozens of apps on my iPhone, but the only ones I ever seem to use daily are mail, phone, HootSuite, Facebook, and weather. A secondary group—Open Table, Yelp, Epi, and Public Radio—comes into play when I am traveling, cooking, or listening to the radio outside. There are a few others I use now and then, but it’s a tiny slice of what’s out there.

The world of gardening apps is changing, however. With ebooks and readers in common use, it makes sense that reference apps can either replace or supplement list-format garden books. And they are. A couple weeks back, Amy reviewed Susan Morrison’s Foolproof Plants for Small Gardens, which Morrison says started out as an ebook. And now we have Allan Armitage’s Great Perennials and Annuals, which seems to be a narrowed-down selection of some his favorite plants for a variety of situations.

As it happens, Morrison and Armitage used the same app-development software, Sutra-Media, so the two apps are remarkably similar in look and structure. They’re databases of plants that can be searched using various filters. Armitage’s filters include Annuals for Shade, Plants grown for Flowers, North American Natives, and Weird and Wonderful, to name a few. The format is simple and workable, and the prose is pure Armitage—for example, his intro to the North American natives begins, “Let’s enjoy them, not argue about them.” The app is also loaded with gorgeous photography.

The only complaint anyone could have with Armitage’s app—and it’s the same voiced in a comment on the Morrison post—is that the selection is too small for true lovers of plant porn, especially someone who, like me, keeps Armitage’s massive Herbaceous Perennial Plants in a permanent spot on the coffee table. There are still a lot of plants here though, and the app is an enjoyable read, whether you’re in the garden or killing time between tweets. As Armitage said when I asked about this, “I would love to do the entire book, with a robust search engine, but these are my choices for good plants, and the app can be updated over time.” And that’s the beauty of an app. You can add to it. Here are a couple of choice quotes from the Armitage app. 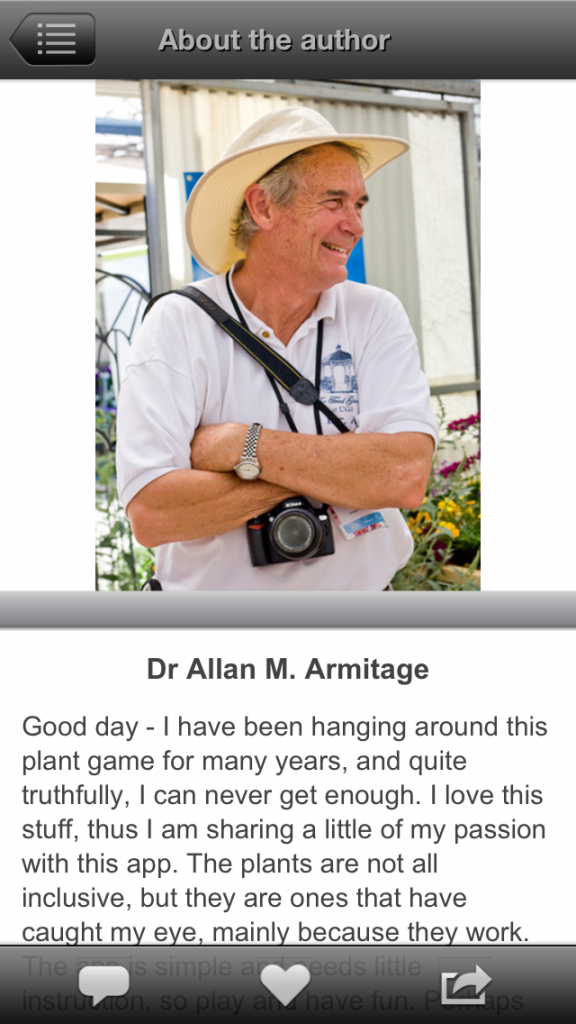 On columbines: While large gaudy flowers appear to be the norm, one of my favorites has always been the delightful red and yellow flowers of the Canadian columbine. Just like citizens of that fine neighbor, the plants are quiet, conservative and do their job without bluster.

On rudbeckia: Goldsturm originated in 1937 at Foerster’s Nursery in Germany, and that it is still going strong in the 21st century says volumes about its popularity. I admit I am tired of seeing this thing in every garden and gas station in the country, but I am equally pleased that a plant with this much beauty could please so many people who would otherwise have planted five plastic geraniums and still watched them die.

There are also some extras, including a bio, videos, and a few other resources, but the plant database is the thing.

If you don’t yet have one of Armitage’s books, especially Herbaceous Perennial Plants or Armitage’s Garden Perennials, this app will not replace them. But for five bucks, here’s a healthy dose of the Armitage knowledge, wit, and charm for your phone or iPad.