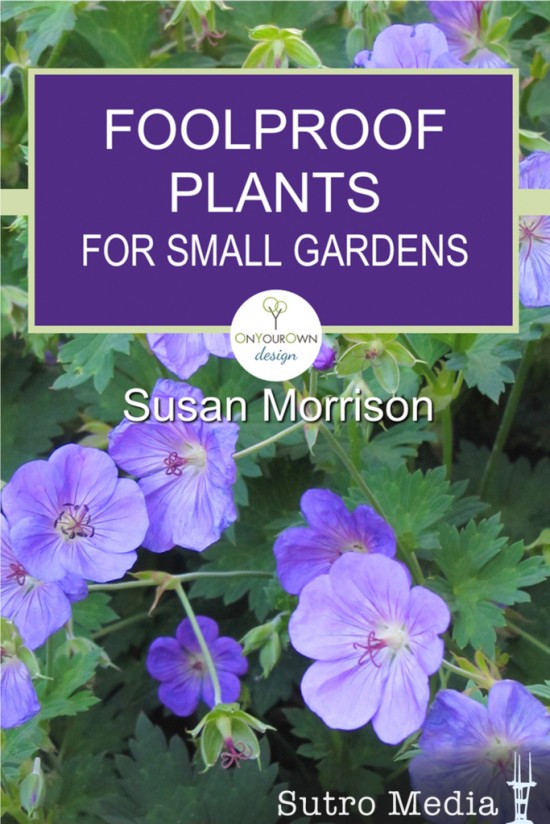 We here at GardenRant World Headquarters have not had much luck with gardening apps so far.  They seemed so bright and shiny and new and full of promise at first, but then–meh.  The thrill faded quickly, and I didn’t have a single garden app on my iPhone when Susan Morrison told me about her new app, Foolproof Plants for Small Gardens. (here’s the Android version)

And here’s Susan, answering some questions about the app:

First of all, why this topic? What is it about small gardens that makes them trickier to pick plants for?

I know from my own design practice and via conversations with designers and gardeners around the country that interest in small plants is universal. Not only are gardens getting smaller as lot sizes shrink, but even large gardens have smaller beds and spaces within them. Most recognizable, popular plants – think camellias, hydrangeas, loropetalums—have 50 large cultivars for every small one that stays less than four or five feet. Even experienced gardeners usually lack the time and resources to identify the dwarf cultivars and less well-known options that are available, particularly when trying to fill an entire garden. And folks that want an attractive garden but aren’t interested in taking up gardening as a hobby have very few easy-to-navigate, inexpensive resources for helping with plant selection if their landscape is small.

There’s a lot of talk about the future of garden reference books in light of digital media. Anytime you’re doing a directory of plants, it just lends itself to a database format. And tablets make viewing the photographs an amazing experience. But–what made you decide to do this as an app as opposed to an e-book?

This concept actually started out as an e-book series with 5 USDA zone-specific books. I will probably still introduce them in that format, as not everyone wants to read about plants on a smart phone or an iPad. Before I committed to the project, the publisher essentially said the only reason to bring out Foolproof Plants as an app is if it offers something that other formats can’t. And I think it does: A much more robust search function than an ebook, an interactive component where readers can ask questions within the app itself, the ability for me to update content that is free for existing app owners, significantly more photos, an audio pronunciation guide of the botanical names, and (mostly) curated links to online nurseries, how-to videos and articles that provide more information on specific plants and techniques.

FYI, I entered a lot of the data over the Christmas holidays and think I might have gotten a little punchy towards the end. Just for fun, I included an Easter egg in one of the plant pronunciations. I’m one of those people that will sit through the movie credits in hopes the producers added an extra scene at the end, so I’m curious to see if anyone finds my own little joke.

I’m probably answering my own question here, but one thing that’s interesting about having this in an app format is that it can be updated. Do you see yourself continuing to add plants, or making updates to the photos, growing tips, etc.?

Yes, to a point. I put the app out faster than I wanted to so that I could introduce it at the Northwest Flower and Garden show, and still have about 10 plants to add that Maria Zampini, one of my expert contributors, has written for zone 5 and 6 gardeners. I’d also like to add a companion plant feature, to help users combine the plants effectively. But truthfully, how much or how often I update will depend in part on how well the app sells, as I’ll need to justify the time.

It’s also interesting that people can post comments. The comments are all subject to moderation, but presumably, over time, I could scroll through a bunch of reader comments about the plants, and you could answer questions. On one hand, this is incredibly cool, but on the other hand, are you worried that you’re going to have to get into long debates over whether this or that plant is invasive, or otherwise get sucked into whatever weird, off-the-wall conversations people want to have about Ajuga reptans or whatever?

You know, I did not even think about that possibility until I read your question! Most questions have been reasonable and easy to answer, such as what plants do I recommend for clay soil, so am hoping this aspect of the app will stay manageable. I would love it if people left comments about their own experiences, good or bad, or recommended other cultivars. I have the ability to screen comments but so far have let all of them through, other than a series of comments in Farsi that roughly translate into variations on the word Hallelujah.

You used a service to build this app– Sutro Media.  One of the challenges of making an app has been the programming, but we all knew that it would get easier, just like making websites got easier. There are quite a few build-your-own-app companies now.   In Sutro’s case, it looks like they have to accept you – so what was this process like, and what would you say to someone else who was thinking of doing an app like this?

Sutro Media has an easy-to-navigate content management system (CMS) so you do not need any programming skills, however, there is very little flexibility in how content is displayed or organized. For example, some folks have been disappointed that they can’t filter multiple categories together, like drought tolerant shrubs with white flowers for zone 8. That would really kick the app up to the next level, but it can’t be done with this platform. Sutro Media’s niche until now has been travel guides and I know they are interested in expanding into other categories, including gardening. They approached me directly about producing an app with them, but I’m sure they would be open to any garden writer that contacted them with a good idea. They do not demand that the content be exclusive, only that the app version be appropriate for the platform’s unique capabilities, so for anyone who has already developed solid content for a different venue, an app might make sense.

Since you’re a landscape designer, do you see yourself using this app with your clients in some way?

Absolutely, and I already know based on the comments and emails I’m getting that plenty of designers are buying it. It’s an incredibly handy resource for showing clients potential plants in the field, plus we designers love curated plant lists geared for specific situations. I would snap up an app like this from another designer or garden professional that addressed some specific plant category, like deer-resistance or high-performance roses.

The photos are fabulous, and I can see that you took some of them and other photographers took some. The app has this interesting feature that allows you to use other people’s photos and link back to them (with permission and/or appropriate licensing, of course). So I clicked on one photo and went right to the photographer’s Flickr page within the app. That’s a really cool idea. Any comments about the photography?

Coming up with photos is the hardest part of any writing project for me, whether it’s a bricks-and-mortar book or a blog post. Sutro’s CMS system has a built-in search function that only shows Creative Commons licensed photos in Flickr. That allowed me to show multiple photos for most of the plants and it’s respectful of the photographer as well, since it not only provides photo credit but links back to the original site.

In some cases you link to sources where the plants can be purchased online. I’m sure that one issue with this is that you want to link to a company that has a mobile friendly website. Was that part tricky?

You’re giving me more credit than I deserve. Almost no online nurseries are mobile friendly, so I basically took what I could get. I was only able to find an online source for about 70% of the plants. Given a choice, I linked to a nursery that I personally know is reputable, like Plant Delights or Annie’s Annuals, but otherwise, this particular aspect of the app isn’t fully curated.

You might not want to give away all your trade secrets, but I know that one question authors and publishers have about apps is, “How do I market this?” The standard answer is blogs, Facebook, Twitter, encouraging good reviews on iTunes, etc. Have you got any other insight to share about how people get the word out about an app?

Right now I’m pursuing the standard avenues you just mentioned, but am planning on a press release to traditional media as well. My hope is that because there aren’t many gardening apps out there, and generally speaking, gardening is not perceived as being particularly cutting edge, I can generate some interest based on the coolness factor. I know Garden Rant’s readers are pretty savvy, so would love to hear any ideas they have on how to get the word out!