My Cocktail Garden: All Done!

Following up on last week’s post about the construction of this here cocktail garden, I’ve got a few more pictures to share, along with some lessons learned. But first, this just in!  My bookstore is now taking pre-orders for signed or inscribed copies of The Drunken Botanist. We hope to ship by March 1, but basically we’ll send them the minute our order arrives.

OK, about the bar.  What I did was ask somebody to build me an ordinary raised planter box, but to make it the right height for a bar, which turns out to be 42 inches tall. I had him put boards across part of the planter area so I’d have a place to set drinks in between the plants. The spacing of the boards wasn’t exactly the way I wanted it to be, but the guy who built them for me very carefully glued them in place in addition to using screws, so I wasn’t able to adjust them and they work just fine.

This was taken on the day I planted it — the mint has filled in since then. I added my own trim, which actually came from an amazing local company called Wallace & Hinz that makes custom bars. They sell their odd bits and pieces as scrap, and I found pieces that fit perfectly. I stained it all the darkest wood stain I could find, which turned out to be darker than the barstools I’d already bought — but if you read last week’s post, you’re already getting the idea that none of this went exactly according to plan. 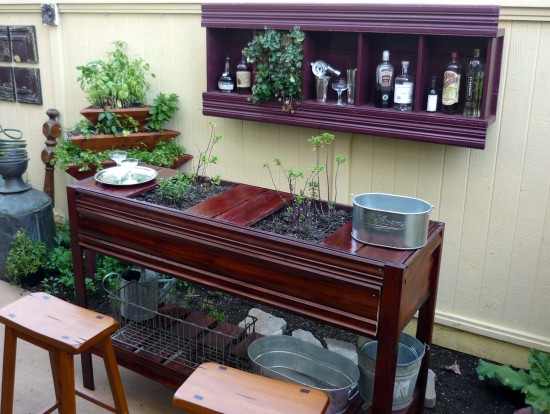 The shelves/vertical planter behind the bar has a very obvious “false front” of Victorian trim.  I could have boxed in the sides and made it look more like it was meant to be that way, but I was so burned out by that time–and so very lacking in carpentry skills–that I just screwed that trim onto the shelves, painted it, and called it good.  It was mounted onto the fencepost with giant wood screws and L brackets, and I screwed a few horizontal boards into the fence for more lateral support, and then screwed the back of the shelves into those boards.

The idea for a vertical planter behind the bar came from this awesome bar I saw in Montreal: 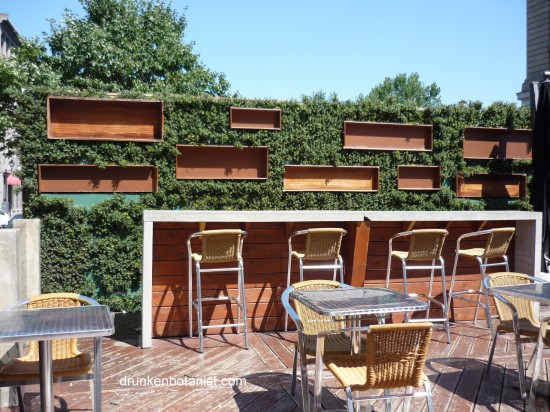 Can’t you just picture it at night when those shelves are filled with bottles and glassware?

Another thing-and this was Susan Morrison’s idea:  These shelves normally hold pots, tools, fertilizer, whatever–but if I have a party, I can just hose the whole thing down and use it for platters and glasses and stuff like that.  Nice, huh?  The guy who built the planters was like, “You want a bookshelf?  Like, a bookshelf? In the garden?”  They are just like bookshelves, except there are small spaces between the boards so the whole thing can drain if I hose it down. 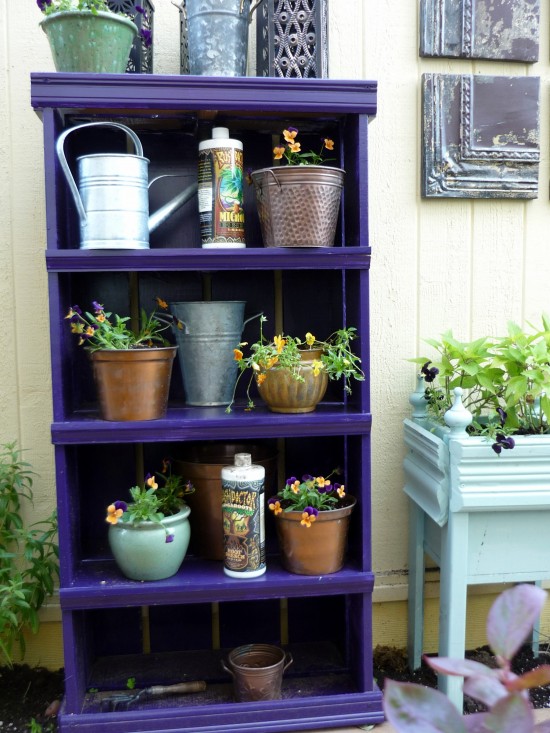 What else?  Well, I did a pallet planter, only I added house trim to that as well to jazz it up.  It sits on concrete blocks to elevate it (hidden pretty well by some agastache I planted in front of it) and is attached to the fencepost with big wood screws.  (If you want to know how to do this, I followed Fern Richardson’s instructions.) 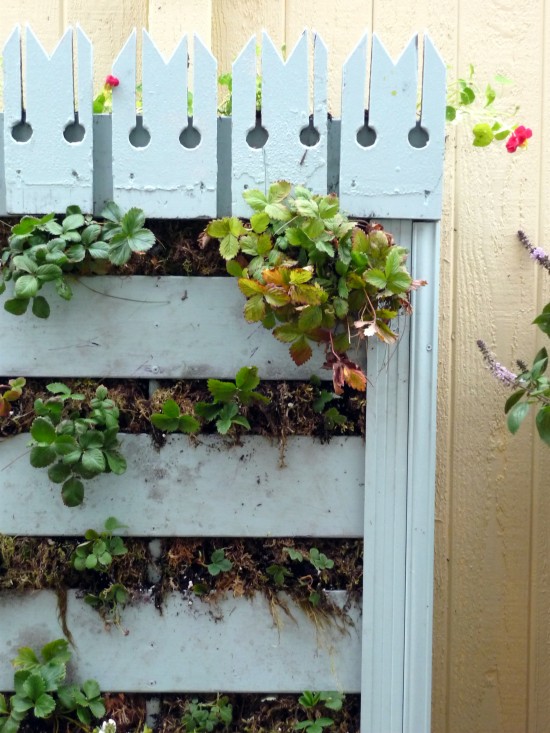 Finally, a couple of words about seating.  Because we expanded the paved areas (check the previous posts for a plan), I was able to work in a little seating, even in this narrow, alley-like space.  That’s nice because it gives a slightly angled view of the garden–which is not easy in a long, narrow space. Also in this photo, you might see old windows hanging on the wall–I wanted something artsy that could give the garden some height, and I figured I could use the glass to–I don’t know–write cocktail recipes on?  Draw silly pictures?  You get the idea. 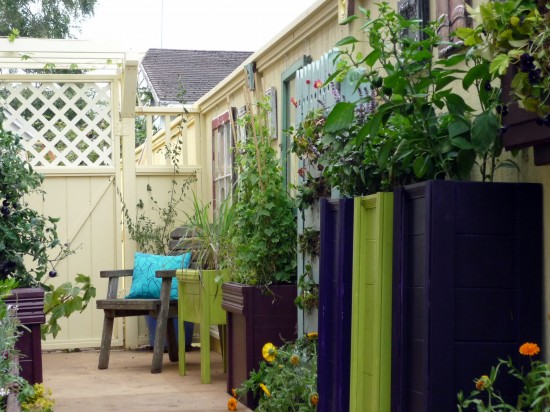 Oh, and I should mention that if the containers are sitting on the ground (instead of on concrete) they have no bottom.  That way, they drain really well, and if I plant something deep-rooted, it can actually grow down into real soil if it wants to.

Here’s one more seating photo.  This is our nice new pad for garbage cans, but I put the cans away when it’s party time.  I actually have a really nice painted bench that fits in that spot, but I can’t seem to find a photo of the bench.  So here it is with another chair.  You get the idea. Seating. 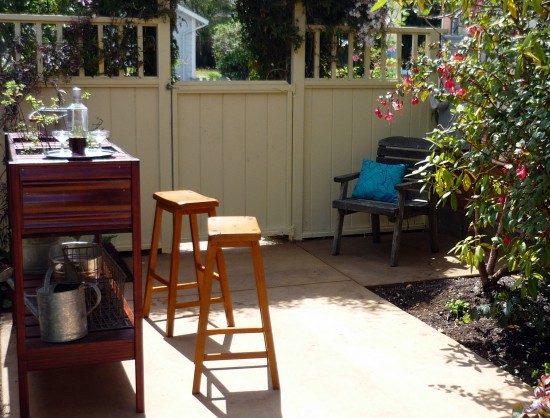 And the porch got power-washed, cleaned, and sealed.  Who knew those grey boards could be this color again?  So it’s not really big enough for much seating, but it’s easy enough to move the funky old recycling bins off the porch and put a chair there, too.  (Also, below right, you’ll see that I put my Triolife planter on a stand and filled it with cilantro, basil, mint, etc.) 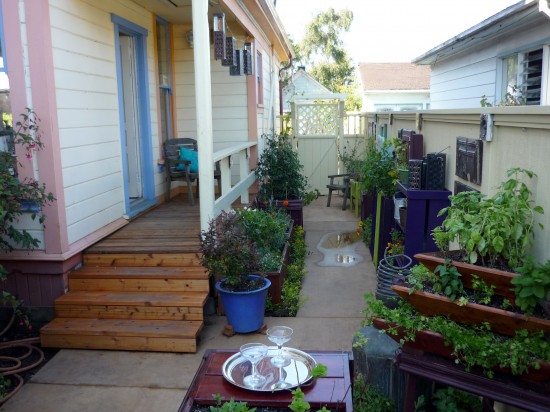 In keeping with the Victorian theme, I even made a vertical planter out of an old wooden medicine cabinet.  The mirror had broken and fallen out during the last earthquake, so I stapled chicken wire where the mirror was (inside the cabinet door frame), drilled drainage holes all around and watering holes on top, and planted into it.  It’s also attached to the fence with L-brackets, screws going into the post, and an additional chunk of wood I screwed into the post just underneath to help hold it into place.  There are also blocks of wood screwed into either side of the fence post so I could attach it in the middle as well.  It’s HEAVY! 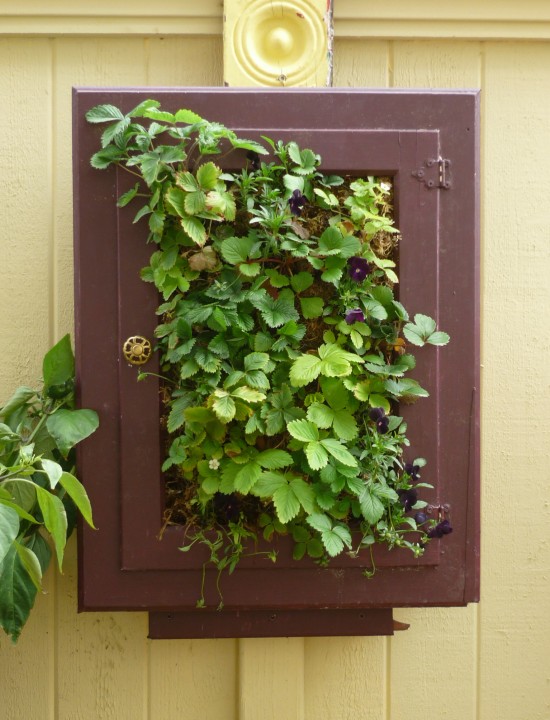 Okay, that’s it for now!  If you’re wondering what I’m growing in this garden, it’s all plants that can somehow be mixed into a drink–with one exception.  I didn’t have the heart to throw out an old rhododendron that had been with the house forever.  But other than that–every single think is drinkable and mixable!  If you’re trying to figure out what that might involve, I’ve got a long list here (click “older entries” at the bottom to see the rest) and most of it is available from Territorial through their Drunken Botanist Plant Collection, and Log House Plants is selling them to West Coast garden centers as well.