Zombie gardening: there’s money to be made 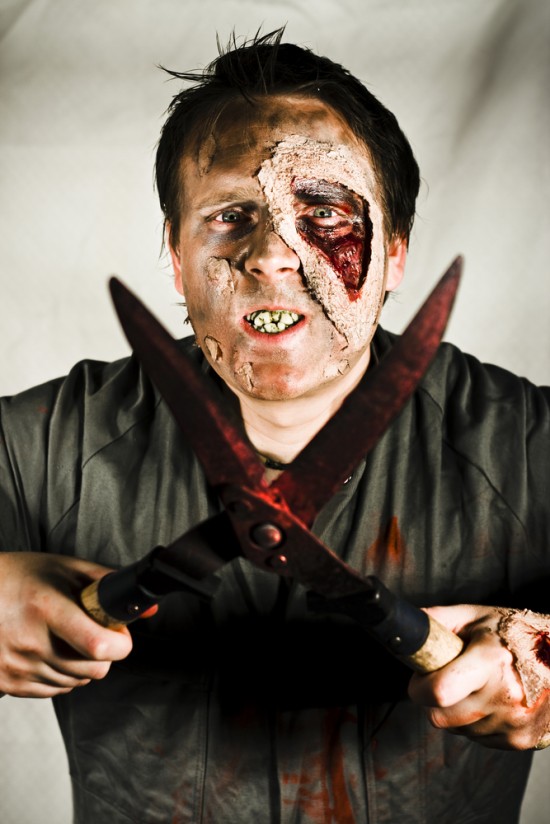 As near as I can tell, the gardening industry has overlooked a vast area of marketing that has the potential to start a gardening revolution among young folk and thus grow a new generation of gardeners in this country.  Following in the footsteps of a current wildly successful television series, The Walking Dead, and alongside the frantic marketing spin offs—such as the Airsoft semiautomatic plinker pictured here—Professor Roush thinks that some creative gardener needs to spin off some zombie-related gardening programs and paraphernalia to enrich our gardening experiences.  Clearly, that should be me, so that I could make a zombie-related fortune and hire other people to do my digging, but it could also be you.  Just cut me in for some of the profit from the idea, okay?

If you do a simple Google search on the words “zombie” and “gardening”, you get some nice links to a zombiefied garden gnome named “Gnombie” ($224.99), and a resin zombie garden sculpture that resembles a corpse crawling out of the ground from thinkgeek.com ($69.99).  You also are referred to several links that will enlighten you on kitchen scraps that will regrow in your vegetable garden (celery, avocados and pineapples. among others).  All-in-all, I suppose those are all nice products and suggestions, but they’re just scratching the surface of what I’m proposing.

I’m thinking of a line of Zombie Pesticides, with nice green fluorescent labels, that will paralyze Japanese beetles so they don’t squirm when you pick them up and squish them, or a Zombie Insect Spray that will cause your hornworms to blunder blindly about your tomato plants without damaging them.  I’m thinking about a group of specialized gardening implements, for instance a Zombie Repelling Hoe with a spike opposite the hoe blade so that it can be used for defense if you’re attacked in the garden by zombies (or by city administrators, often difficult to distinguish from zombies, who demand that you rip up your front vegetable garden).   I envision a Zombie Compost  Fork with an ergonomic handle designed to decrease arm fatigue whether you are tossing compost or zombies.  I myself would surely purchase a Zombie Water Cannon with a sensor primed to shoot when large moving bodies such as zombie deer cross the path (I think this product may already exist, but it is missing the added zombie marketing power.)

We need a garden prophet creating videos and pamphlets about plants that will fortify your grounds against zombie invasions (a nice hedge of Rosa eglanteria might suffice), or plants that will recover quickly from trampling damage caused by hordes of aimlessly rambling zombies (they would also be useful for gardens frequented by neighborhood children).  We need a writer proposing designs for garden “rooms” where we could escape and hide from zombies (or nongardening spouses).  We need Scott’s to quit poisoning the environment and fund the breeding of a Zombie Grass that would stay neat and green without mowing or watering.

I suppose the latter suggestion is a little too fantastic to hope for, but any or all of the others should take the gardening world by storm and bring a few of the television-addled zombies out there back into the garden.  If some editor out there wants to put together a Zombie Garden Manual, count me in for a chapter on roses.  Is anyone out there interested in a very dark red, extremely thorny rose called ‘Zombie Lover?’   Even better, it could be alternately marketed as ‘Zombie Knockout’.  That will, based on my previous experience, really draw in the zombie gardening multitudes.