What a Little Paint Can Do in the Garden

In my last post about my new back garden I thanked Rant readers for their design tips, all of which I incorporated.  Well, most of which – until now.  The super-honest Christopher C wrote to tell me that he CRINGED whenever I posted a photo of my neighbor’s privacy screen, shown below, because it looked like a beat-up old pallet. 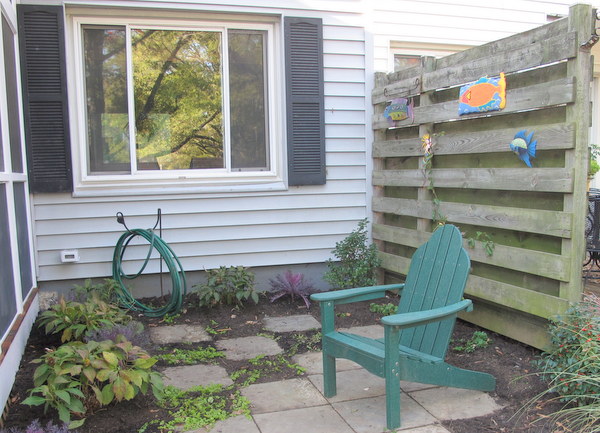 Veteran bloggers like myself are known for their thick skin but I’ve gotta say, that kinda stung.  But in a good way, an inspiring way.  So I anxiously researched 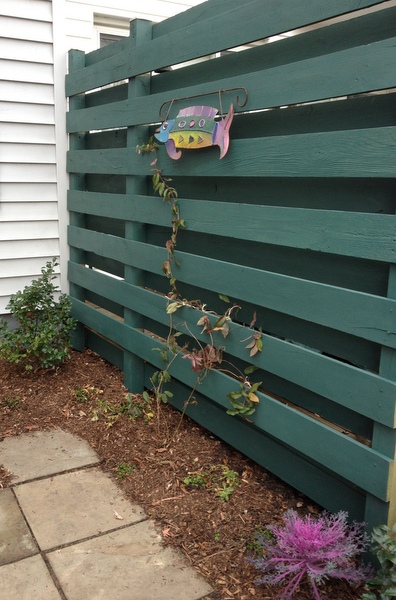 my co-op rules and learning that paint is allowed, determined to make this one purple – the primary color I’ve chosen for the plants.  (Following Thomas Rainer’s directive to choose a color scheme and stick to it religiously in a space this small).

But then another super-honest gardenblogging friend came to visit and immediately nixed the purple idea and while she was at it, expressed HORROR, I say, HORROR at the sight of my bright green garden hose.  (Not the one above, which doesn’t look bad but was damaged.)

Being a faithful follower of suggestions – at least when my gut says they’re right on – I set out to find a better looking hose (done! Post to follow when it arrives) and chose this deep green for the screen, a color destined to be less controversial with the neighbors than purple.  It also A, matches the Adirondack chairs perfectly and B, is an actual color that colored stain comes in; purple isn’t even on offer.

So Christopher, it’s not the light green you suggested but has it at least put an end to the dreaded cringing effect?  I sure hope so.  It’ll soon be festooned with the evergreen vine Bignonia (crossvine) that you see here in its first season.

In the corner is a ‘Blue Maid’ holly that’s supposed to grow to 6-10′.  The groundcovers in this little court are the vigorous Sedum takesimense for sun and Creeping Jenny for shade.

Me, I love the big dose of color, which also looks good from the living room, where it’s a prominent feature out the window.  I just hope it stays this way, despite my failure to follow directions for applying it.  I declined to use the wood cleaner  I was supposed to use first; the chemicals in it are SO NASTY I couldn’t stand the idea of washing them down into my garden soil.  So, time will tell.

I’d painted garden walls before and recommended paint many times for the unsightly sheds and garages of my clients and agree totally with the sentiments of Maureen Gilmer:

I believe in paint.  It’s cheap.  It makes huge changes in a matter of hours.  Paint is the poor garden maker’s Yellow Brick Road to bold, beautiful spaces.

Click that link to see her excellent examples.  Googling “painted garden walls” also led me to an example by designer  Shirley Bovshow, who uses a slightly lighter green to cover a cinder block wall.

I did manage to find an example in purple by an English designer who’s far bolder than I am.

Searching for “painted garden walls” on Houzz yields a few good examples, like the fabulous one below.

Anybody else using paint in their garden?  And why do you think we see so little of it used?