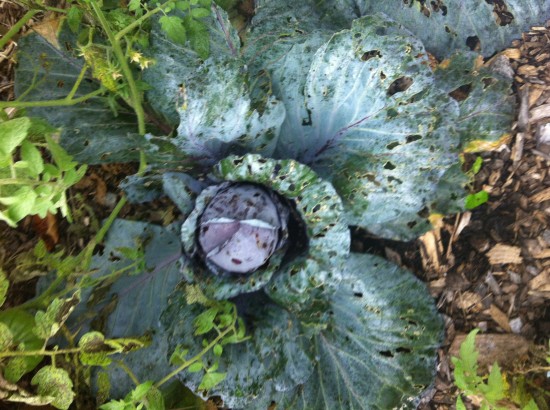 More nutritious because of the holes? Possibly.

Rant readers, please welcome Dr. John Reganold of Washington State University, who has done groundbreaking work demonstrating the value of organic agriculture, including studies that show a correlation between the quality of the soil and the quality of the food it produces. In the wake of the recent furor over a Stanford University review study comparing the healthfulness of organic and non-organic foods, which found little evidence that organic foods are more nutritious, I asked him for his thoughts on the Stanford group’s conclusions.

Q: What do you think of the Stanford organic study?

A: Since 2000, there have been at least 12 review studies—meta-analyses of previous studies—looking at the nutritional quality of organic versus conventionally grown foods. And nine of these studies have found some evidence that organic food is more nutritious. Just three have concluded that there is no consistent difference or that there is a lack of strong evidence. Another study led by Dr. Kirsten Brandt of Newcastle University that I think is the best study found that organic fruits and vegetables are more nutritious. It didn’t receive much press when it was published last year, by the way.

One of the differences between the two review studies was whether they included comparisons between different varieties of the same crop, which can vary greatly in terms of nutrition. In the Stanford study, 60% of the comparisons used were between the same cultivar, so presumably 40% were not. Brandt was more picky and only compared like cultivars.

Looking at the big picture, I’m glad the Stanford group did the study. They are spurring debate, and I think that is good. While they found that there is a lack of strong evidence for the nutritional superiority of organic foods, they also found that consuming organic food can reduce your exposure to pesticides and antibiotic-resistant bacteria.

Q: The New York Times piece about the Stanford study mentioned that it neglected to include the strawberry study you led. That study found that there is a connection between the nutritional quality of strawberries–as well as their flavor–and soil quality, including the biomass and activity of soil microbes. And that on both fronts, organic wins. In the past, you also were part of a long-running apple study that connected the quality of the fruit with the greater diversity of nematode species in organic soil. Do you think we’ll ever establish once and for all the connection between healthier food and healthier, livelier soil?

Q: The Stanford study didn’t mention flavor. Your research is unusual in that it considers flavor–and has found that organic does taste better.

A: There haven’t been many taste tests done. My strawberry study did find better flavor in the organics. But the results of other taste tests have not been conclusive.

Q: Okay, as a gardener, I know my homegrown organic produce tastes better than supermarket food, and I have faith that it’s more nutritious, too, thanks to my beautiful soil and all the creatures in it. But I do find that Stanford study disheartening.

A: Keep on gardening! The Stanford study did find some results that suggest that organic food is better for your health. You’re also reducing the environmental costs of your food, in part because you don’t have to drive to the store to buy it. And that connection to the land that we develop when we grow our own food improves our feeling for the whole planet.