Thank you, Rant commenter, for designing my nook garden

When I posted photos of my new back yard and asked for suggestions I sure got ’em – some so thoughtful I just have to share them.  (Remember these?) A commenter in Vermont previously unknown to me had LOTS to say and she’s already changed my garden.

For example, she wrote this about my shed: “You planted one too many vines, if you research the size of each and contemplate their competitive visual “busy-ness” when mature. = 1 vine to relocate.”  She’s right, and that fix is already done.

Her ideas for the “nook garden by neighbor’s privacy fence” were really intriguing:

1. Consider this a contemplative/zen garden viewed from porch and bluestone terrace.
2. FEATURE the fence. It has great texture. Don’t hide it behind (unhappy) hollies.
3. FEATURE the “floor”, too, to enhance the “floor to ceiling” view off your porch (and terrace). Consider a symmetric or Escher-esque (i.e. starts symmetric then “loses” its pattern) checkerboard of bluestone 1′ squares starting off your new bluestone terrace into the space. You played with lawn alternatives at your former home. Play here, too. Really low moss-like Sedums work well in mine. Any ground cover that matches the conditions should be considered. I got this idea from a Kyoto teahouse garden, done in moss.
4. I suggested clearing out much of the large shrub “clutter”, but you still need some vertical interest for “contemplation”. Statue/sculpture/found art are hardscape ideas. Also Spodiopogon sibiricus is a spectacular vertical grass for partial shade with great fall color in addition to grass’s usual selling points.
5. Create an “end” to the privacy fence to suggest that YOU installed it in your design. Extend it another “section” (with a more trellis-look?) and “host” the “extra vine” from your shed. OR plant a shrub feature (maybe one of the extra Blue Billows, though maybe not tall enough) that “says end”.

Feel free to email me if you want some checkerboard garden photos. . . Kate

So email Kate I did and got these great photos, starting with her inspirations shown above – a Kyoto meditation teahouse with a “moss checkerboard on one side which morphed to a larger highly pruned azalea checkerboard.”

And the next photo shows her interpretation of that checkerboard effect, and it wow’ed me: 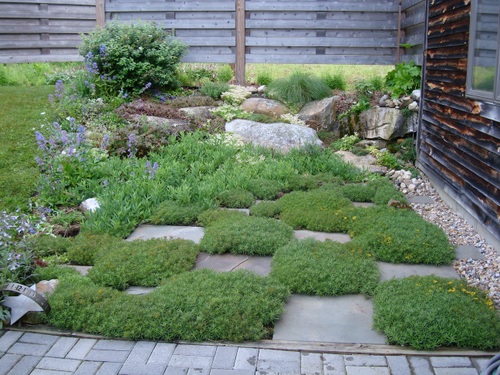 Here’s what’s in this charming space:

Prunus pumila v. depressa ‘Catskill’, which I planted on a lark 4-5 years ago. It grew lanky/long, finally lusher and I limited its “limbs” to the slope. I’m starting to prune it this summer to try to visually achieve the angular pruned “azalea” contrast.  And you can see I’m playing with a “river” of Sedum album chloroticum edged by thin clusters of Sedum sexangulare (in bloom here which detracts) and some Sedum middendorfianum  because it has such great color.

So we email back and forth about her ideas for my privacy screen (warning me about the long-term maintenance needs of paint, for one thing), vine options, and the shrubs I’d chosen (she wasn’t a fan.)

Two weeks later, here’s my nook garden before and after Kate’s intervention.  I removed some of the “unhappy” hollies, making room for a crossvine that’ll grow quickly over the fence.  Then I added 14 more flagstone pavers, some close enough together to fit a chair over them and some in the checkerboard pattern she used so effectively.   The colorful metal fish on the screen won’t last long; I hope to replace them with some cool metal artwork that I’ll look for when I’m in Mexico next month.

To Commenters
This just goes to show that amazing things can happen when you ask readers for feedback.  Sure, there may be some brutally honest truths coming your way and thick skin may be required, but honesty is just what I needed in this case.  A commenter I’d never heard from before stepped up to the keyboard to become my long-distance design coach.  A few clicks at the Google machine yielded the small-world discovery that we even went to same tiny Ohio college, though not quite at the same time.

So thanks to Kate Kruesi and to generous commenters everywhere.