I have grown corn! 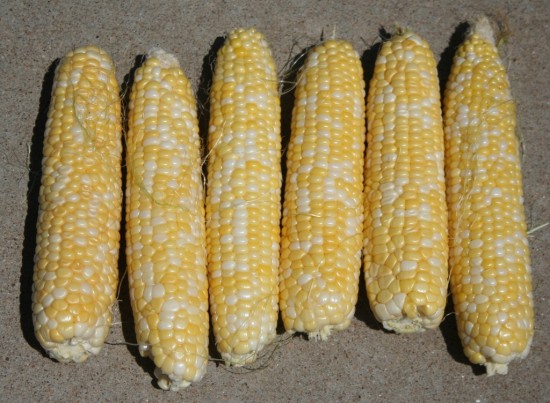 A miracle has occurred on the Kansas prairie.  I have, at long last, grown sweet corn in the Flint Hills.  Praise God, and pass the butter and salt!

This may not be an earth-shattering accomplishment to many of you from other climes, and perhaps not to any farmer in this area, but I have been completely stymied for years trying to grow edible sweet corn in my own garden.  I have experienced years where I had poor germination (soil too cold?), years where the wind blew the knee-high corn flat before it could tassel, years where the ears didn’t fill out (too hot for pollination?), and years where I had decent ear growth, but opened up the shucks to find that I’d raised only a superb crop of earworms.  I’ve had decent corn stolen at the last minute by raccoons, I’ve had seedlings mowed down by deer and rabbits, and I’ve even caught quail scratching and eating the seed as soon as I planted it.  (All minor pests compared to earworms in this area.)

To borrow and modify for gardening a term currently popular among teenagers and young adults,  I have been “corn-blocked” for a decade by wind, drought, earworms, raccoons, rabbits, deer, and birds.  The worst of all are the earworms—as a species they are completely disgusting.  I refuse to just cut off the end of an ear full of worms and worm feces and then cook and eat the remainder.

As a descendent of several generations of Indiana farmers, my inability to grow edible corn is even more embarrassing. My long-lost Indiana, where the soil drains better, where the wind is gentler, the rains more frequent, and the mid-summer heat less searing, is tailor-made for corn. You can toss corn on the surface of the ground in Southern Indiana, and it will grow and produce.  Heck, it grows as a volunteer annual from year to year if you leave too many kernels in the field. 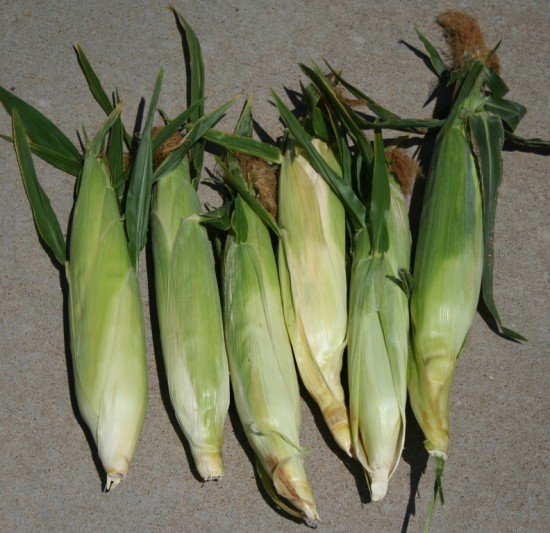 This year, inexplicably, the Maize God decided to take pity on my efforts and allowed me a decent crop.  Not without some effort on my part, however, effort honed by years of hard-won lessons.  I selected my corn variety carefully, choosing Burpee’s ‘Honey and Cream’ because the package noted that it had “tight silks.” I laid down some soaker hose along the rows and religiously deep-watered twice a week after germination. I provided plenty of nitrogen fertilizer as the corn stalks rose.  As soon as the silks appeared, I sprayed weekly with cyfluthrin, stopping when the silks were brown, for a total of three applications over late June and early July.  I made sure the electric fence stayed in working order as the ears grew and the signs of deer in the yard became more frequent.

These six ears of merely slightly poisonous corn are just the first of what I hope will be a few nice meals for myself, Mrs. Professor Roush, and her diminutive clone.   I don’t have any innate desire to upset all the diehard organic gardeners out there, but I firmly believe that any residual insecticide that penetrated the husks and survived the printed withdrawal period must surely be less harmful to my health than the earworm poop.  Probably tastes better too.  Anyway, I’m not worried about the insecticide;  I’ll just feed the first couple of ears to Mrs. Professor Roush and if she doesn’t develop tremors, than I can safely dig in.

Remember that scene in Cast Away where Tom Hanks starts his first fire on the island and dances around shouting to the sky, “I have made fire”? Well, that’s me today. I HAVE GROWN CORN!