George Ball and Heronswood on a Story that Ends Well 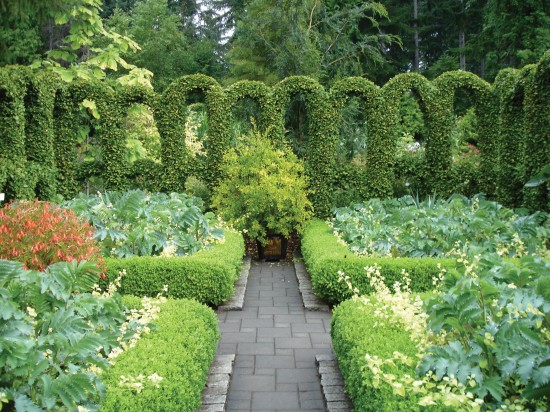 Heronswood, the revered botanical garden created in Kingston, Washington by plant collector Dan Hinkley and his partner, architect Robert Jones, as an adjunct to the nursery they founded in 1987, was put up for a sealed bid auction last month by its owner of the last 12 years, W. Atlee Burpee & Co. . . and won by a Native American tribe, the Port Gamble S’Klallam, who have a reputation for careful environmental stewardship and whose ancestral lands include the site of the garden.

Yesterday, I interviewed George Ball, the CEO of Burpee, about the sale.  In 2006, unable to make Heronswood work as a business, Ball closed the nursery and moved the catalog operation to Pennsylvania, where Burpee is headquartered. For this, Ball was pummeled in the press and lampooned on the cover of the Plants Delight Nursery catalog as “George C. Wrecking Ball.”  Though Garden Rant, too, piled on, I always felt the pummeling was unfair.  After all, no one had forced the previous owners to sell.  Yesterday, I interviewed George about his history with the garden and his hopes for its future.

Q: The purchase by the Port Gamble S’Klallam Tribe seems to be a happy ending for Heronswood.

A: I like to call it a happy beginning. We had been talking to the tribe on and off for a few years, but they were tentative. I’m very happy that they emerged as the winner of the auction a few weeks ago.  Working with them since the sale has been like opening the door to an advent calendar. Every day, I learn something new. In their press release, there was language about maintaining the garden not just for the tribe, but for the larger community, that surprised even me.  We’d opened the garden three or four weekends a year to the public to benefit The Garden Conservancy. The tribe has said that they will open Heronswood to the public even more.  They haven’t yet announced how they are going to use the garden.  They are in the planning process, which is good.  I have been very impressed at the long-range view they are taking and the care.

A: It was a great match for Burpee. We have been in the perennial business for a long time. Mr. Burpee, our founder, was a big perennial guy. But we were doing the broad strokes, while there was a growing interest in les choses belles et étranges. If the customer wants it badly–and as long as it doesn’t mean selling destructive invasives–I’ll see if I can make it a business. Heronswood was a very famous place in the gardening world, and I liked the concept of Dan Hinkley’s collecting, since I’d been on plant collecting trips since I was 14 years old. I was very impressed by the garden. Impressed, impressed, impressed.

On the other side, Dan Hinkley and Robert Jones said that they were tired of the business side of things. Burpee was a big consumer company. There was the idea that Heronswood could go national.

I made a miscalculation in thinking that Heronswood’s plants could go national. I’d bought Heronswood for the plant collection– between 7000 and 8000 taxa. But Heronswood is in a rain forest. I learned that what did well in Heronswood’s wet Zone 8 wasn’t necessarily good in Southern Illinois or Indiana. It was a regional nursery. Now, the mail order business Heronswood had established wasn’t regional. But it was 10 miles wide, three inches deep. The early catalogs had a huge list of plants. But a lot of things, we’d sell four of.

Dan and Robert stayed on as managers. In 2003, I said, “Look, guys, this isn’t working. I’ll sell Heronswood back to you for half of what I paid for it.” It was a great deal. But they refused. So the remaining two and a half years of their consulting and management contracts were strained.

When I moved the nursery, it was for operational efficiency. But we also subjected the plants to aggressive and deliberate adaptation tests in the Heronswood Gardens at Fordhook Farm. We are going to continue to offer under the Heronswood name the really great hellobores, tiarellas, hydrangeas that have more of a national market.

Q: When you closed the Heronswood operation in 2006, I read the New York Times piece about it and was amazed by Dan Hinkley’s statement, “I would much rather see the garden euthanized immediately than to see it decline over several years.”  It seemed remarkably churlish, given that he’d voluntarily taken millions for the place.

A: I was stunned by that statement myself.  Maybe he was saying he’d like to euthanize George Ball.

Q: And yet, according to all reports, you’ve maintained the garden beautifully since then.

A: I love the place. We logged so many hours and so many miles of air travel for it. I sent a guy out there to do the first complete physical inventory of the plants. It took a year to do, since there is a 10-month growing season at Heronswood and the plants don’t all appear at once. I’ve taken great care of the place. We not only preserved the garden in excellent intact condition, the only plants removed even for research purposes were culls. We never removed a single species from the garden. Thousands of people have visited on the Garden Conservancy’s Open Days in recent years–and nearly all of them have had their breath taken away.