Peter del Tredici: Research on the Impact of Invasives may Surprise You 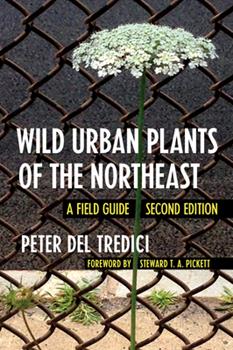 The importance of eliminating invasive plants, which has long been considered settled dogma, is unsettling itself before our very eyes.

Harvard’s Peter del Tredici is making waves among scientists and designers, though maybe not yet with ecologists, with his book Wild Urban Plants, briefly reviewed here.   He breaks the mold by looking not at a plant’s history but at the ecological services it’s currently providing in developed landscapes – like cites.

“Among conservation biologists, ecologists, and managers, the default approach is to try to eliminate and root out non-native, invasive shrubs — anything that seems to change an ecosystem,” Carlo said.  “But the problem is that most native communities already have been changed beyond recognition by humans, and many native species are now rare.”

Carlo explained that his team wanted to test whether certain well-established, invasive fruiting species have negative or positive effects on bird and fruiting-plant communities.

When he compared test sites with and without an abundance of Japanese honeysuckle, the honeysuckle proved to be a boon to fruit-eating birds.

They determined that the abundance of honeysuckle predicted the numbers and diversity of birds within the region and even beyond the region. That is, the honeysuckle and bird communities had formed a relationship known as mutualism — a term that describes how two or more species interact by benefiting mutually from each other’s existence.

Carlo argues that it’s not only expensive to try to remove invasive plants like honeysuckle – and keep them removed – but it can actually harm the newly formed balance of an ecosystem.

His big take-away? That instead of assuming that introduced species are inherently harmful we should ask: “Are we responding to real threats to nature or to our cultural perception and scientific bias?”

I can just imagine the heated arguments going on in faculty lounges between biologists and ecologists.