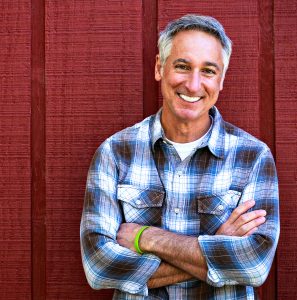 So I guess a how-to, home vegetable gardening series isn’t appealing enough to rebroadcast this year…the year that growing your own food is the hottest trend in gardening and a hot topic period. Never mind that the series already exists…in the can…paid for…and prime fodder for a hungry audience. A large audience mind you that is desperately seeking helpful advice specifically on this topic (many for the first time) and trying to do the right thing in a more local and sustainable world.

The series I refer to is Fresh from the Garden on the DIY Network. I am well acquainted with this unique and informative series, as I was its only host. It really was a brilliant concept. Each episode featured one or two different vegetables while demonstrating everything you needed to know to grow that particular plant, from seed to harvest in a single 30-minute episode. Never before or after have I seen such a series. We completed 52 informative and comprehensive episodes, covering just about every vegetable you could possibly grow over three years of taping the series around Atlanta, Georgia.

Since the production wrap in late 2005, it has aired every year since. That is until now. I had not seen anything on the DIY Network website or program schedule touting it’s return for 2009. So I sent an email to the VP of Programming. My inquiry was simple; “do you have plans to air Fresh from the Garden this year” I asked? After not getting a reply to my first inquiry, the response to my second inquiry was quick and to the point. “Thanks Joe- to my knowledge, we will not be airing the show”.

Well that was a shock! I had to know more and at the same time, state my case as to why of all years, when finally this series is primed for a bigger and more eager audience than ever, it wasn’t going to be out there. I replied to his response stating this point and more. Again, the reply was quick and succinct; “Thanks Joe-I hear you, but unfortunately, it doesn’t fit our current programming strategy”.

I passed the reply on to my producer of that series, also eager to hear what they had to say. She was not surprised. In her conversations with the DIY Network execs, they’re going for a much more edgy style these days. I guess the ancient series I did with them is so old style.

I needed to know more. Just to see if I could get a little insight for myself right from the source, I replied to this latest response with one last question; “could you briefly sum up the current programming strat egy for me? It would be very helpful (in my role as gardening communicator) to have a sound bite from an authority so I’ll be better equipped to answer when this question comes up again (as it does often!)”. Not surprisingly, this time there was no reply.

It was an honest question. What IS the programming strategy? If we can’t get an established network (part of the HGTV, Food Network, Fine Living family) to rebroadcast a show that is now more timely now than ever, on such an important and exploding topic and so pertinent to their audience and for no additional production cost, then I’m not holding out much hope for any new gardening shows any time soon folks. Either they’re not getting sponsors (very likely) or the execs that decide what makes it on the air, don’t see that gardening is important enough to get the coverage. Am I wrong here? I hope not but until someone tells me otherwise, (and I welcome a response from DIY or any network) I’ll stand my ground on this one.

What do you think? Is gardening, and vegetable gardening specifically, off the radar for “programming strategy” or is it just the lack of edginess and excitement of a four-year-old series? I don’t mind passing the baton to the 20 something hipster host, but is that all it’s about anymore? Seriously!

About the photo:  It happens to be the garden I started from scratch from bare ground just four months before this pic was taken and is also the very garden where we shot the last year of our series, Fresh from the Garden on DIY Network. It may look large but it is only 40 x 60 feet. I’ve had so many great emails and comments from viewers telling me how much they learned and enjoyed series. It’s a shame I have to let them know it won’t be coming back on this year!
[Photo he’s referring to no longer available. Trying to find it again.]