Wicked Plants: The Making of the Movie – and Watch Here 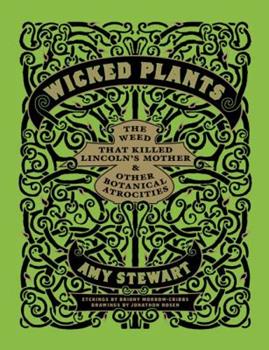 It’s not enough to write a book anymore; you’ve got to have a video, too.  I’m lucky to have a brother in the film industry, which makes this much easier.  When The Earth Moved came out, Jason shot some footage of me out giving talks about worms; the result was a DVD that I could send to producers who were thinking of booking me on their show. We didn’t even think about putting it on the Internet way back in 2004.

Then, for Flower Confidential, we had an actual location–the greenhouses of Sun Valley, one of the growers in the book–so we were able to put together something that was much more like an overview of the book. When we shot the video, in mid-2006, YouTube was still brand new, and it just didn’t seem immediately obvious how to get a video in circulation online. A few websites were set up to host book trailers, but nobody knew about them, and they mostly hosted the trailers they had been hired to do themselves.

But–we sent out the DVDs with the press kit, and I put it on YouTube and on my website, and now, of course, YouTube is really the one and only place you need to launch a video. I see that it’s been viewed over 5300 times, which is pretty impressive for a book trailer.

The Flower Confidential video served a couple of unexpected purposes:  First, it helped sell the book to my own publisher.  I don’t mean that they weren’t “sold” on the book already; I just mean that everyone has a slightly different idea of what kind of book a book like Flower Confidential is.  Is it an expose?  A nature book?  A science book?  A travelogue or a memoir?   A gardening book? A business book? But that video gave everybody an opportunity to really “get” the book in only three minutes.

Second, it really helped people who were getting ready to interview me.  Not everybody has time to read the book before they have you on their show–I understand that.  But they can usually take three minutes to watch a video, and they come away with a list of questions for the interview that aren’t too far off-base, which makes the interview go much better.

And that brings us to the new book—WICKED PLANTS:  A Book of Botanical Atrocities, due out in May 2009.  Because it’s more of an illustrated gifty/referency book, with a couple pages for each wicked plant, Jason and I knew that we needed something that had that same episodic feel–but we wanted it to be more entertaining than just a “Hi, I’m Amy Stewart, and I’m here today to talk about some of the plants in my new book….”

So Jason came up with the idea of having me walking around a neighborhood stumbling across all these dead bodies, then explaining which plant was the culprit.  Very cute and fun to do.  You’ll see my sister-in-law’s feet, my adorable nephew, and the neighbor’s dog playing the victims.  (One interesting note:  we couldn’t get the dog to be still, so when you see me bending down to look at the dog, you’re actually seeing two separate pieces of film:  one of the dog by herself, and one of me bending over an empty space.  The wonders of television!) I asked Jason if he was serious about allowing me to use his toddler as a corpse in a video to promote my book; he said he had an idea for an outtake at the very end that would make that OK.  You’ll see what he meant when you watch the video.

And we got a permit to shoot at the Santa Rosa Rural Cemetery, a wonderful spooky old graveyard. I think the whole thing really captures the spirit of the book, which is what a book video should do. We shot it over one very long day, plus another hour or two the second day for Jason to shoot b-roll of the cemetery, and then it took a couple of weeks, on and off, for Jason to edit the video and find music for the score. (An editor working 40 hours/week will produce about 5-10 minutes of finished television a week)  It took a lot of work ahead of time to get the permit, find locations and plants (we rented a sago palm from a nursery, and you’ll see that I could find only one scraggly monkshood in bloom), and write the script.

I was just talking with Jason about this last night–he is, by the way, off to Sundance with the latest film he edited, World’s Greatest Dad starring Robin Williams–and he said that the only way we were able to get it all shot in a day was that we had literally planned out every line and every frame. He rented very professional equipment–lights and screens on stands in addition to the camera–so it took three of us to set up every shot and haul the gear around. We had a script and cue cards, so there was no experimentation, no figuring out what to say–we just shot the scene and moved on. Having a script was also really helpful for my publisher–they knew ahead of time exactly what the video would be, and nobody had the expectation that they could ask for a lot of time-consuming and difficult changes to the finished product–we literally didn’t shoot anything but what the script said.

That was far more than I intended to say on the subject  — so now, here’s the video!  Enjoy it and feel free to post it on your own blog or send it around to friends.  And more news about the book coming soon.