The Best Little Garden in DC, and the Plant Geek who Tends It 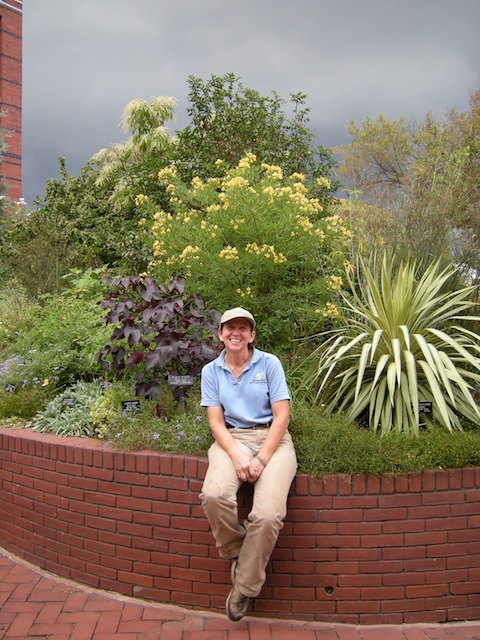 The Mary Livingston Ripley Garden is tucked inconspicuously between two Smithsonian Institution buildings on the National Mall. Created by architect Hugh Newell Jacobsen in the 1980s, it’s a serpentine series of raised beds, intimate seating areas and antique planters.  Not only is it my favorite little garden in the whole city but, winding as it does between Constitution Avenue and the Mall, it’s gotta be the best path in town, too.

So who’s in charge here?  For 10 years now  Smithsonian horticulturist Janet Draper has tended the Ripley Garden, almost singlehandedly.  Check out these highlights of Janet’s career:

With credentials like that, Janet’s probably a bit full of herself, no?  No way.  Utterly down to earth is more like it, with personality  coming out of her ears.  (I’d been told she’s “a hoot” and I should interview her stat!)

Well, I got my chance to meet Janet one steamy night last week when she spoke to the local Landscape Designer’s Group.  She started by sharing her favorite tidbits about the garden’s history – that Mrs. Ripley had saved this valuable chunk of land from its planned destiny as a parking lot.  And having seen a garden for the blind in California, Mrs. Ripley was determined to have the garden be fully accessible – thus the use of raised planters, enabling everyone to touch and smell the plants.  Yet the garden doesn’t scream accessibility; it simply looks like an extension of the Victorian architecture of the Smithsonian itself.

DESIGN v. PLANTS –  WHO SAYS YOU HAVE TO CHOOSE?
Here’s where it gets really interesting and relevant to GardenRant readers.  Janet says she’s a “plant geek, not a designer” and that her design philosophy is “shove ’em in wherever they’ll fit”.  Okay, but the effect she’s achieved is beautifully designed, not at all chaotic, and she emphasizes the use of eye-popping foliage.  Actually she said  “I like sexy foliage” – there’s a concept for you.  She even quoted Beth Chatto’s recommendation to use flowers only as baubles or accents.  But still, Janet’s roots as a plant geek are evident everywhere – in the riotous collection of plants themselves and the plant LABELS everywhere. (Thank you, Janet.)

And this bit of realpolitik in the garden: the 1,200 tulips planted every fall are promptly yanked when their glory has passed. Why?  Because in order to rebloom  reliably they’d have to be planted a foot deep and that’s “not gonna happen.”  (She didn’t mention their butt-ugly foliage but I bet that’s another reason.)

SOME PLANTS SHE LOVES

SOURCE OF PLANTS
With Janet’s background in propagation, we’re not surprised when she points to plant after plant that she started from seed.  Her main source is the seed exchange of the Hardy Plant Society of the Mid-Atlantic, which she urged us all to join.  The collection is also supplemented with “care packages” from her friends in the industry, and she does trials of Proven Winner varieties.

CARE OF PLANTS
Naturally we all wanted to know how Janet got this very public garden to look so fabulous.  The answer is organically, using as much compost as possible and lots of leafmold.  She will add a bit of Plantone for plants just getting started, and confessed to “juicing” the garden a bit this year to show off for the American Public Garden Association, which held its annual meeting in DC this year.  Container plantings are naturally fed, too.

RECORDKEEPING
Her system is one Excel spreadsheet indicating: Latin and common names, where each plant came from, its size, and when it was acquired.  Though she takes pictures, she wishes she’d taken more, especially of the “ugly bits”.

THE PUBLIC
“I’m lucky not to have to cope with deer,” Janet told us, “but don’t forget I’ve got thousands of human visitors to deal with.”  And how’s that working out?  Well, she’s flattered when people walk through with a notepad taking notes but infuriated when people steal the labels and positively livid when people steal the plants, including shrubs in full flower.  Though it’s heartening that so many visitors respond protectively, reporting promptly to her when they spy visitors snatching a souvenir.

And the public isn’t shy about asking questions, and not just “Where are the rest rooms?” Answering plant questions is actually part of Janet’s job and she loves it.  There’s even a comment box for visitor feedback, and the most common message left for her is “Thanks for the labels!”

But the ultimate pay-off in gardening in such a public spot is this: every single day she hears “Love your work!”  Janet wondered aloud how many jobs include that particular perk and her listeners wondered if she might just be the happiest government employee in all of Washington, D.C.  Though truth be told, she isn’t just about serving the public, blah-blah-blah.  There’s this: “I get bored and hey, it’s all about me.”  So who says you can’t do personal gardening in public?

SHE’S ONE OF US
It was no surprise to hear Janet say: “I’m an opinionated gardener.”  Now let’s see if she has time to read gardening blogs – or at least one.