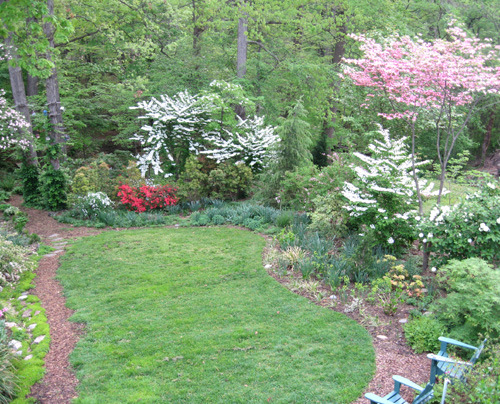 For a plant that stirs the bowels of ecogardeners and Torojockeys alike, turfgrass looks bland enough.  And that’s part of the problem – the monoculture that is the great greensward of American lawndom.  Lord knows I’ve ranted about it enough, and not just because when it’s grown the way the folks at Scotts recommend, it wastes resources and pollutes waterways.  I just find lawn care so tedious I can barely force myself to do it.  Honestly, I suck at lawn care and mine looks like crap by about mid-June.  Just take this spring photo and substitute the color brown for the color green and you get the idea.

But this year my garden and I have embarked on a journey together out of that sea of sameness to a place that’s unknown, a little scary and exciting, too. The goal is to cover this 1,000-square-foot, sloping, mostly sunny space with something that will, like lawn, prevent run-off, be reasonably evergreen, and withstand both a little foot traffic and having the garden hose lugged across it from side to side.  Oh, and be drought-tolerant and prevent weeds. Tall order, I know, but if, like me, you’re even a bit of an anti-lawn crusader, you want those magic replacement plants to succeed.  Go, team!  And what might they be?

In all ignorance, I thought I could turn it into a meadow, as you may remember.  Enough said.  Next I’ll try a mixture of walk-on-able groundcovers, starting with what I have or what’s super-cheap: 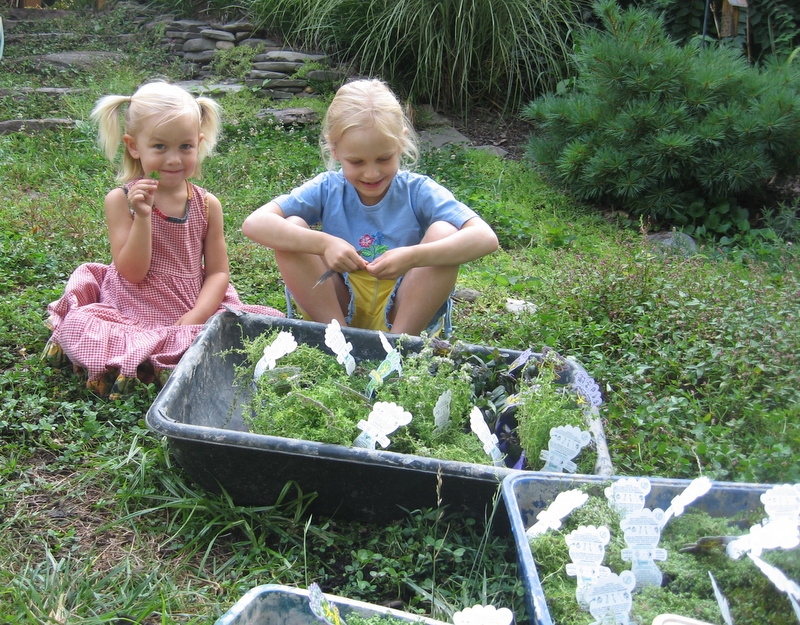 Helping me sort out my Stepables

LOOK, MA, I’M TRIALING!
I’m always terribly impressed when actual plantspeople like Graham Rice write up the results of their experiments.  So now, in my best horticulturist-wannabe mode, I’ll be growing some choice selections from a most intriguing plant group, sold by a most intriguing company – Stepables in Oregon – as many of them as the budget allows or they have samples to spare.  Here’s what’s appealing about them, in the words of spokeswoman Sally Credille:

Lest you worry I’m on their payroll or a total whore for swag, this will be the “Survivor!” of the hort world, with plants potentially voted off the garden at any time.  So readers, we’ll just see if these little beauties can deliver on all those promises.  Updates to follow.  But first…

THE METHOD OF PLANTICIDE
Now, how to remove the lawn that’s there.  I’ve rejected herbicides, rototilling and baking under black plastic, the latter just because I don’t want to buy all that plastic I’d never use again.  So I’ll be going the cheap-and-organic route – 6 or more layers of newspaper covered with a couple of inches of leafmold mulch, watered and watched for a few weeks until it all breaks down.  But will it break down fast enough for me to do all the planting by mid-October?  Tension mounts.