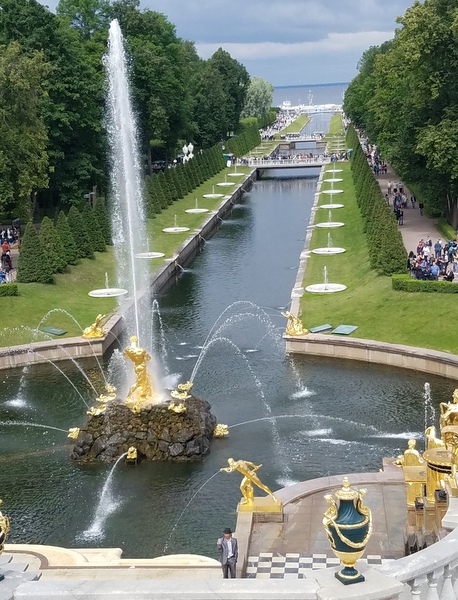 Most gardeners after about 40 years in the asparagus patch begin to at least consider downsizing. You know, cutting back to only three-quarters of an acre of weeds, fewer disease-plagued rose bushes and compost-pile-death to those ever-needy iris and day lilies.

The same with back-yard fountains. Sure, they offer bubbling sounds and elegant gushes of water at the flip of a switch, but the pumps go bad, the dirt clogs the outlets and it can be difficult to keep the hungry goldfish trapped within them happy.

Chances are the house, yard and garden fountains will eventually be sold to some minimalist gardener who only cares to raise a few onions in some ecologically-pure raised bed anyway. 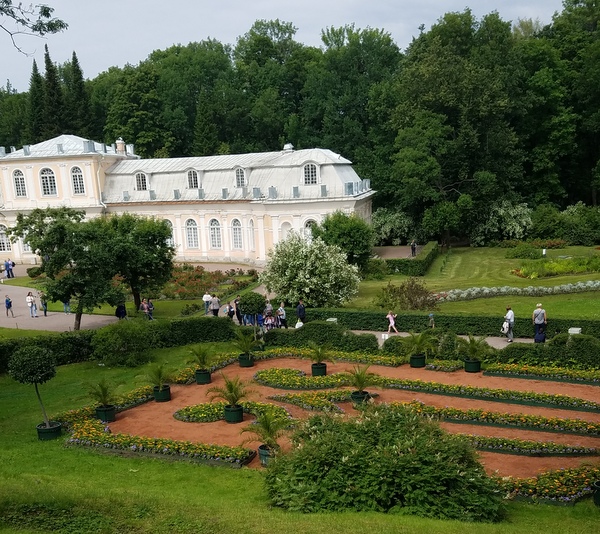 Then there was Peterhof, the cozy 1,250-acre Russian complex of paths and gardens, 150 incredible fountains and a looming yellow palace first brought to light by aptly-named Peter the Great in St. Petersburg in the early 1700s.

Three centuries later it still tells a larger story: To hell with downsizing

Our summer visit there was part of a cruise ship trip to the Baltics, a journey that took in Russia, Denmark, Estonia, Finland, Sweden and the Netherlands.

We saw plants aplenty – including a much too brief stop at Tivoli Gardens in Copenhagen, with its 15 separate gardens dating back to 1843 spread amidst a circus of splendid carnival rides and the ghosts of its 80,000 tulips that appear each spring.

But it was Peterhof that inspired the most memories – and we barely had time to wander one-tenth of the place. Downsizing for Peter the Great – and all those who came after him – was not on their agenda. 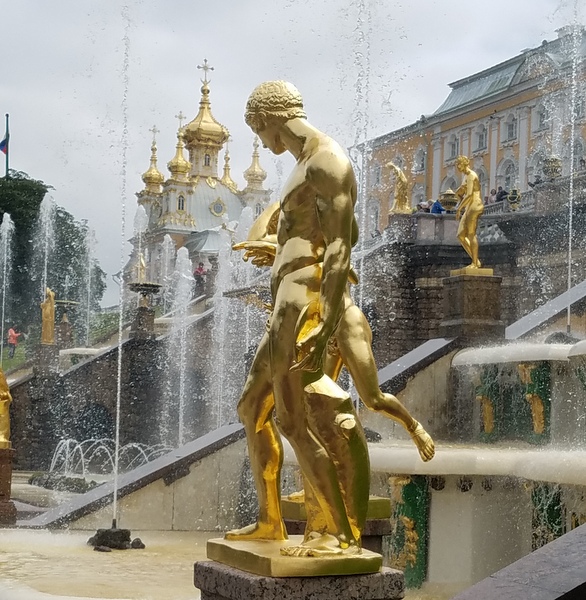 Peterhof was absolute proof there’s still a place in this world for a minimal amount of oversized attitude with a large nod in the direction of art history and engineering – and at least the Russians are paying for it. The Mideastern oil sheiks seem to try the same, but much of their works seems over the top and offensive.

Along with the clinging joy of honest sweat and dirt under the fingernails, that’s another thing I like about gardening; it asks that you wander the world a bit to examine what came before, and what a tiny place we all now occupy in that food chain.

Peter the Gardener, a big, handsome, alcohol-loving mix of foresight, genius and brutality, first mentioned the Peterhof site in his journal in 1705, but only as a good place to build a landing for his war efforts. 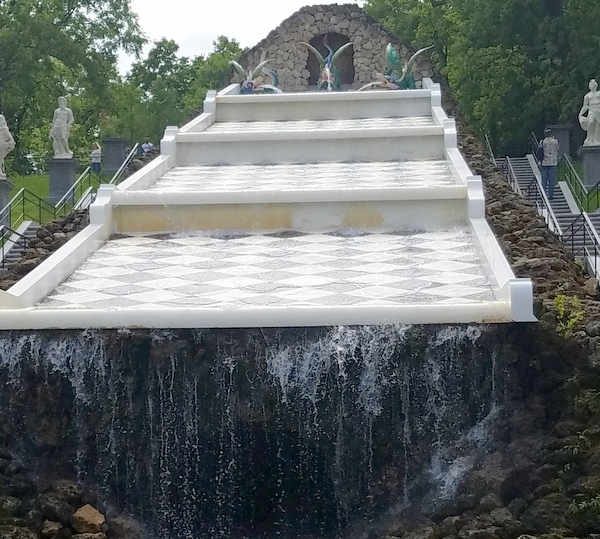 It all evolved from there, but only after he and his ancestors brought it some architectural help from France and Italy and the like. They also had ready access to about 10,000 laborers with absolutely no choice in the matter.

Few of them, I suspect, got any medical and retirement benefits or paid vacations. In fact, my first thought upon seeing all those massive, gold-edged European castles, palaces and churches is always of the people who built them. The rest of it is aristocratic arrogance and God’s misspent money.

So, evolve Peterhof did. It grew several palaces, the grandest being The Great Palace built during the reign of Empress Elizabeth. And over time such palace walls across Russia and Europe were coated with paintings by Rembrandt, van Gogh, Goya and such.

For all that, Peterhof reached its true glitzy height when Catherine the Great, the Russian Hostess With the Mostess from 1762 until 1796, held all-night parties there illuminated by 10,000 candles.

Peterhof has a lot of shrubs, flowers and trees; many of which I see back home again in Indiana. Although I know better – and have traveled the European world a fair amount looking at gardens – that is always something that still surprises me a little. I mean shouldn’t Mother Russia offer us only Russian plants, and if they had to send one to us, why the very invasive Russian olive? Was Putin behind that?

In a totally horrible way, Peterhof was downsized by the Germans in World War II. The pictures show a bomb-shredded landscape, smashed walls and fountains torn to pieces. It was war-mentality so ugly Stalin bombed it just to forgo Hitler the pleasure of using it.

But the outsized gardens mattered in Russian history, and to its people. The fountains were rebuilt to full size and working condition. All of them. There was no downsizing. The place meant too much. Peterhof now gets 4.4 million visitors a year. 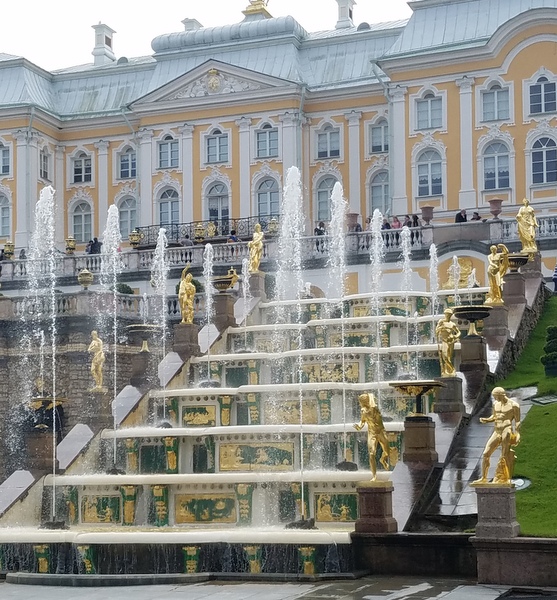 Those fountains are amazing. Their inherent genius is the leaping streams of water are not pushed by pumps, but through huge lakes and reservoirs built above them. The gravity-fed water flows downhill through pipes, the water pressure building to the point the fountain spray erupts 60 feet into the air.

The most glorious of them – the Sampson Fountain with its golden figure of that legendary warrior wrestling with the jaws of a lion – is the centerpiece of the Grand Cascade. Its 64 fountains and 200 bright-gold statues gush water in all directions, an elegant frenzy of art, engineering, history and spectacle. All that water then flows gently down the Sea Canal past other surging fountains to open waters. 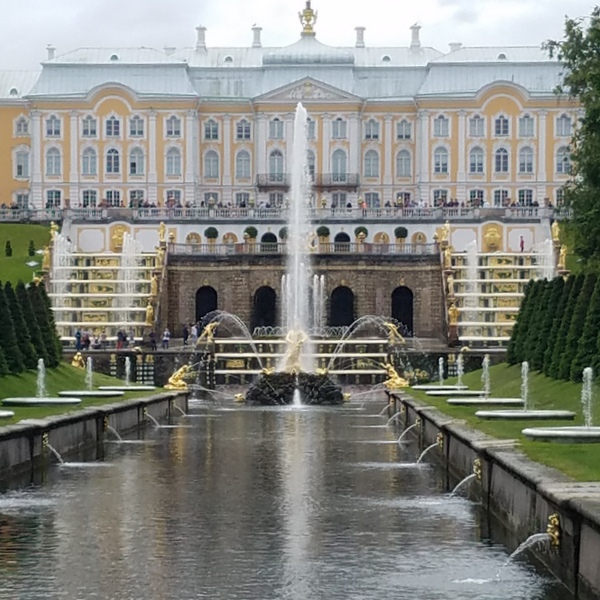 Some credit, please, to those ancient artists, architects and forgotten laborers. Their fountains first cranked up in the early 1700s – more than 300 years ago. The Germans stole the original Sampson during World War II. The Russians replaced him by 1947. Fully operational and still going. Wow.