I remember a day in April of 2003. It was one of those mythic, glorious spring days that sporadically show up between late freezes and tornadoes here in Ohio. And it was one to behold. Perfect. Most importantly, it was the first of such days that year. Truly “the first nice day of spring.”

It was the kind of day that gets every gardener outside gardening, and I decided to cut down a rank silver maple in the backyard so I could plant something better, or, as the case is with silver maples, so I could plant anything. Safety glasses and hearing protection on, and I’m quickly in my own little succession of tasks and intermittent random thoughts as I merrily progressed through the job. The ground was soon a “pickup sticks” mess of brush and logs. I remember sorting my way across this morass. I was happy. Happy to be outside. Happy to be outside on this glorious spring day. Working in the sun. Working in the sun with a chainsaw. Making progress on my yard. Making a better garden. I remember stepping on a log, and, Lord, don’t you just know it, it rolls like an alligator drowning a goat.  And off I go, airborne like Superman. Airborne like Superman with a running chainsaw in hand.

It’s funny how the mind works. It might take me twenty minutes and cause me a hernia to add three numbers together in my head, but in the fraction of a second it took me to plummet to earth, my brain clearly and correctly lined up a number of thoughts:

1) “Throw the chainsaw so you don’t sever something.”

2) “Oh, it appears as though I’m heading straight towards that big, knotty log.”

Boom. In the moments that followed, writhing on the ground in agony, I remember being truly impressed by how terrible the pain was, but I was equally impressed with the supercomputer quickness of my thoughts in the span between dumb mistake and terrible injury. I had identified a threat, and eliminated it. I had assessed my plight, accurately predicted the outcome, and I even managed to put it all in context. All in a microsecond. Lying there, I pondered this. And I wondered how the hell that very same mind, the one that had ripped through those equations so crisply and precisely, was indeed also the exact same mind that apparently was unable to prevent the calamity in the first place.

Anyway, four broken ribs. Four weeks laid up, unable to breathe, cough, laugh, scratch my back, nod my head, change the channel, or have a fly land on my nose without a sharp, vicious reminder that I had broken my ribs. On the first nice day of spring. Fortunately for me, I have a garden and a lovely and caring wife, and she would occasionally wheel me out to sit in the garden where I could enjoy the healing beauty of plants and nature. In that peaceful environment, I recovered and, eventually, almost got back to normal. 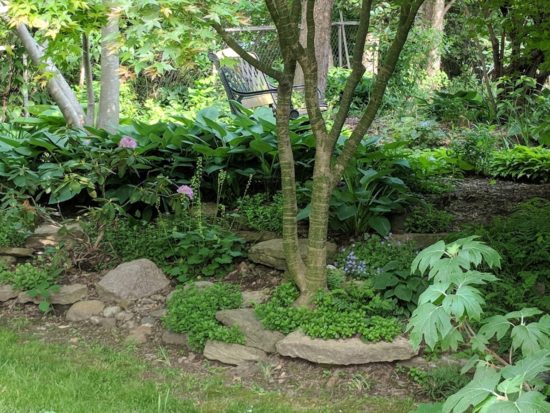 A bench ready made for a good convalescence.

I found that same solace and peace from my garden as I recuperated after blowing out my back that time I tried to carry a boulder from my truck to a new bed in my backyard. As before, my wife would wheel me outside and I would sit amongst the blooms and the birds and heal. Likewise, my garden was a safe refuge after I fell off a ladder while pruning wisteria and landed on a nest of ground hornets. And it was there again for me that time when I burned poison ivy vines and had a terrible reaction. And, again, when a huge root ball rolled on my foot.

I live across the street from a bike path, and it’s a wonder how many people use it. They run, they walk, they bike, and they talk. All for their health, and I watch them as I garden, astonished that I’m often getting the same exercise as they are, but, at the end of the day, I’m also getting a beautiful garden while they’re just going around in circles. I laugh and shrug off the irony, knock the dust from my clothes, and call my wife to help stand me back up on my ruined knees. As I hobble inside, I shake my head thinking about the joggers. They just don’t get it, do they? 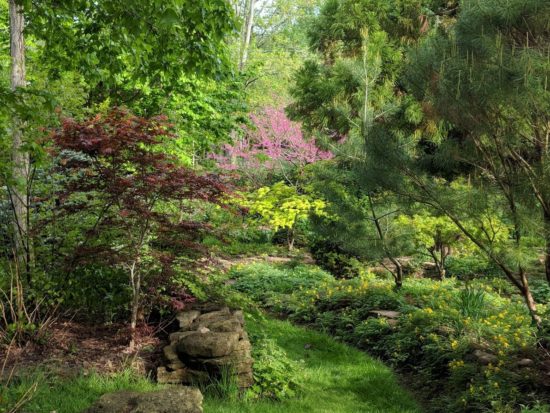 A path that beckons one to hobble further.

Several weeks ago I cut my finger to the bone because I was using my open pruners as a hammer. They slipped. I got cut, and bled, and bled, and bled. I should have got stitches, but I didn’t. I did get a raging infection. A few days off work recovering in the garden, and I only had a scar as a reminder. The next finger over won’t bend at the outside knuckle. It was smashed between a pair of landscape timbers during a project. I read on my hospital chart during one of the remarkably long intermissions between any kind of medical attention in the ER that the medical term for my injury was “Acquired Deformity.” 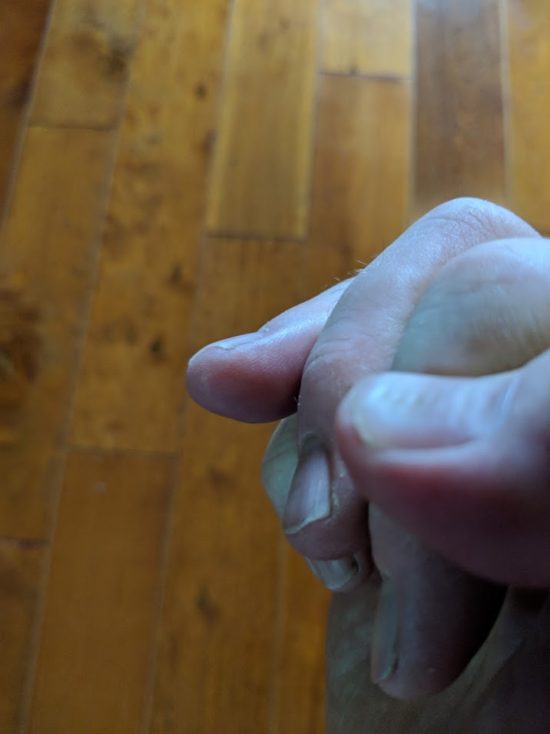 I’m so glad I have a garden. I’ve seen numerous studies that indicate that hospital patients who have a view of gardens or nature survive more often, heal faster, suffer fewer complications, and require less pain meds. I think of this every time I take only three Aleve instead of four before I go out string trimming. I just can’t believe the amazing amount of heightened recovery my garden has so generously gifted me with after the many injuries I’ve incurred. In the fullness of time, some of these memories come to me almost like old friends. The post hole digger to the chin episode. That time a walnut fell from 50 feet up and knocked me out. Or when I stepped on a garden rake and got whacked on the nose by the handle. That time I got my calf caught in the tiller. Or when I burned my hand on the spark plug of a blower. Oh, and there was that time I was chopping up yard waste with my mower and a chunk of wood flew out and hit me in the crotch. The pebble in the nostril incident. That time I face planted into the roses trying to jump a fence while being chased by a raccoon. After each of those times, I found renewal and joy in my garden.

I wonder how people without gardens get by? How do they do it? No flowers to gaze upon. No trees to convalesce beneath. No bird songs. No buzzing bees. No delightful fragrances. No paths to wander. No calming perspective. No spiritual fulfillment. No Zen moments. These people. These people who have none of this, where do they go with their pain?

Me? My garden is my happy place. Sure, it’s a lot of work, but what a treasure to have when an injury comes along, or a rare soil-borne disease, or some kind of strange bullseye rash. And I just wonder where the hell I would be without it?