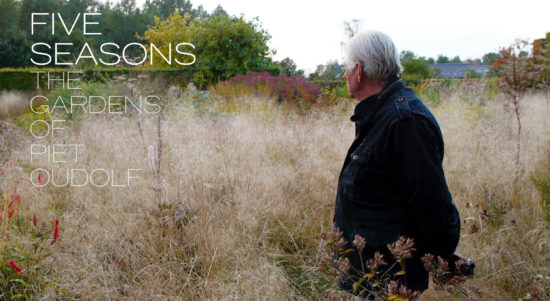 The documentary Five Seasons: The Gardens of Piet Oudolf opens with Oudolf pulling out colored pens and drawing, with his left hand, bright squiggles, slashes, curlicues and abbreviated Latin plant names. Oudolf’s paper drawings and seasonality become seductive themes of Thomas Piper’s film. “Yeah, it may look wild, but it [his gardens] shouldn’t be wild. This is what you’d like to see in nature,” Oudolf explains.

I watched Five Seasons in mid-May at Louisville’s Speed Museum Cinema. Thomas Piper, the film’s director and producer, was introduced by Tom Smarr, who worked with Oudolf on the High Line in New York. Smarr is now the Horticulture Director of 21stCentury Parks and the new Parklands of Floyds Fork in Louisville. 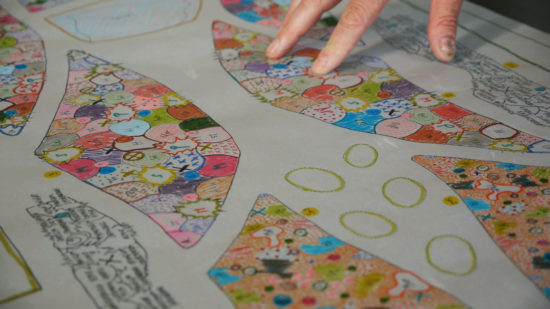 Oudolf cuts an impressive figure. He’s tall and handsome with a full head of stylish silver hair. The 73-year-old Oudolf doesn’t come off like a “rock star” or “cool guy,” according to Piper in the Q & A following the film. “He doesn’t draw people into a frenzy, but he does draw a crowd.”

Oudolf and his evocative garden designs have been drawing international attention since he designed the Royal Horticultural Society’s Glasshouse Borders in Wisley, England. (I’m not sure anyone from the Netherlands has made such a garden impact in the United Kingdom since William of Orange introduced topiary.)

Oudolf’s naturalistic plant palette of perennials and grasses has been honed from years of observation in gardens and in the wild. “It’s all about atmosphere,” Oudolf says. Visiting natural  places was, and continues to be, an important piece of his learning curve.

During the filming, he visits the Texas Hill Country in spring. Thousands of bluebonnets and Texas paintbrushes are in glorious bloom in the seasonal rush before hot temperatures and unpredictable summer rainfall signal a hasty end to the ephemeral outburst. 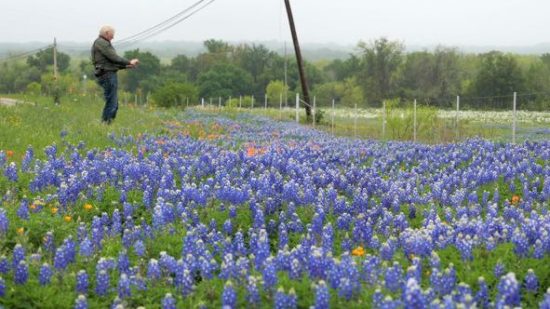 There’s a funny segue during this portion of the film where Oudolf takes a break from plant hunting to visit a pit barbecue joint. “Completely insane,” he says, overcome by the Texas blooms and slow-cooked pork ribs.

Oudolf always wanted to create something but didn’t realize the richness of plants while he was growing up in a family of restaurateurs and barkeeps. The bright light wasn’t turned on for him until he was in his mid-20s, when he got a job in a garden center. “It was something I needed and didn’t know it.”

Oudolf and his wife, Anja, bought a home and property in Hummelo, Netherlands, and opened a nursery in 1982.  They began creating their garden. Growing nursery plants, and gardening, provided a means to study plants and eventually make a living. “Piet is always lucky when I’m with him,’ Anja says. “She’s the force behind me as you can imagine,” Piet responds.

Oudolf became a friend of author and garden designer Henk Gerritsen, who had learned lessons from Mien Ruys, the past doyenne of Dutch design. Gerritsen preferred a softer and more natural color palette to Ruys’s bright colors, but he liked her artistic expression. Gerritsen and Oudolf hit it off. In 1990 Gerritsen co-authored with Oudolf  their first book together, Dream Plants for the Natural Garden. 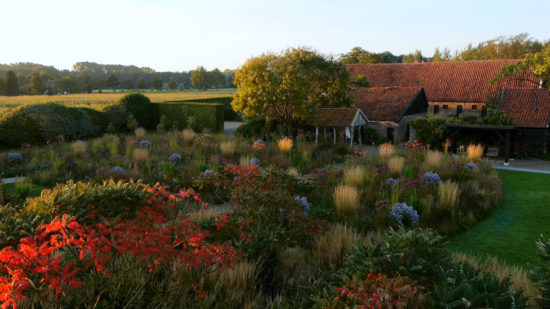 Oudolf’s signature American designs are the Lurie Garden in Chicago’s Millennium Park and the High Line in New York. Thankfully, Oudolf found Wisconsin nurseryman Roy Diblik during the Lurie Garden planning. Diblik visits prairies in his spare time to understand the nuances of native plants he’s growing in his nursery. Oudolf and Diblik are kindred spirits. Diblik supplied many of the perennials for the Lurie Gardens. The Lurie Garden was Oudolf’s first attempt at a pure natural planting. “You could not control, only conduct.” Oudolf is adventurous with his diverse choice of native and non-native plants. “If they don’t behave, we throw them out of the community.”

Is Oudolf’s work political? “The environment is under pressure. Will it save the world? I don’t know. At least it will save me.”

The Lurie Gardens, which had once been a parking deck, “may not be a miracle, but almost” according to Oudolf.  The Lurie was an inspiration for new ideas and became the narrative for the wildly popular High Line.

Tom Smarr was the High Line’s Horticulture Director. “Piet is a true artist,” Smarr said, during the film’s introduction at the Speed Museum. Oudolf doesn’t fuss around. He told Smarr, “Take it out if it’s not working.”

Oudolf is shown drawing plans for a staggering 57,000 perennials and grasses at Hauser and Wirth Garden at Durslade Farm in Somerset, England. Manuela Wirth said, “I thought your garden drawings were sexy.” The 72-year-old smiled wryly and said, “I was, in my past.” He is secure in his own skin.

Oudolf issued a caveat of what to expect at the new garden. Patience will be required. Some plants will be “screaming” (for joy) while others will be “crying.” Patience is imperative.  An Achillea will make a splash the first year while an Eryngium may take two or three years.

“A garden is also a promise. It doesn’t have to be there. You’re looking forward to what will be there.”

Understanding what will be there requires imagination.

I hope you get a chance to see Five Seasons: The Gardens of Piet Oudolf. Here’s the list of upcoming screenings.