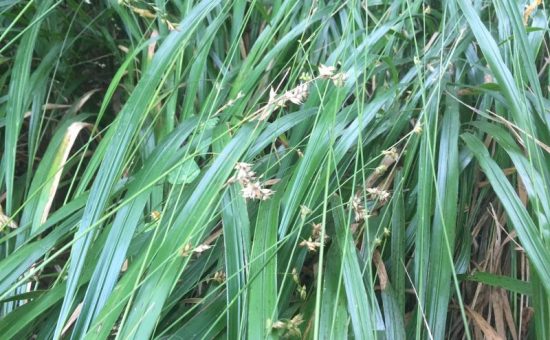 Diarrhena americana. The Latin name doesn’t inspire lustful desire does it? What a pity. It’s better than its name.

I remember the moment I first came across this native grass.

I had no idea what its name was when I was introduced. But Rick Lewandowski knew the name right off the bat. Diarrhena must be the only plant that you could argue has a name that implies intestinal fortitude for anyone who would dare grow it. The common name, American beak grass, doesn’t move the meter on the hit parade either.

The momentous September day of discovery in 2005 was hot and humid—a common, and soul sapping, late-summer condition in the Ohio Valley.

Rick pointed out a small clump of Diarrhena on the woodland edge along one of the gravel fire roads at Bernheim Arboretum and Research Forest in Clermont, KY. There wasn’t anything special about it. I wouldn’t have paid any mind to it all, but I was playing with the pros that afternoon. They notice features I would overlook. Plant geekdom doesn’t begin to describe the botanic universe where Rick Lewandowski and Paul Cappiello reside. I was happy they let me tag along. Paul and Rick’s talents far exceed my plant expertise. They have the genius to notice the subtleties that I would overlook. “Oh, yeah,” I would respond, not having a clue what they saw.

I collected a few seeds. OK, I confess. I stole a pinch of seeds. I can’t justify my common thievery. I left plenty for the next foraging wild critter. (I wondered later if the dozens of chigger bites might have been punishment for my indiscretion.)

I sowed seeds directly into a shady patch in my home garden. I stuck a tag in the soil nearby. Plastic tags often get stepped on and broken or heave out of the ground during a winter thaw. Golf tees make a helpful backup. At least the golf tees stake the territory, even if the tag vanishes. 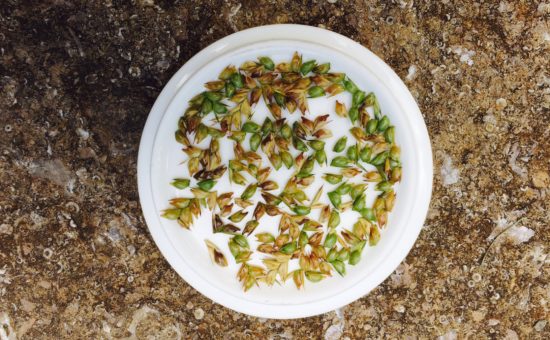 The seeds germinated the next spring. For three years I found nothing to write home about. It took another half-dozen years before I found Diarrhena’s rightful garden resting place.

My friend Bruce Carnahan, a multi-talented artist and landscape architect, designed and built a dry creek bed and retention pond that doubled as rain garden.

We live in an old house. The storm water tiles had collapsed long ago, or had been obstructed by tree roots. Louisville’s storm water, in big rain events (a more common occurrence in the last 20 years), occasionally reaches overflow. Storm water and raw sewage end up in the Ohio River. A Federal Consent Decree mandated improvements that are currently underway to help prevent the overflow. We are forbidden from reconnecting to the storm water system, so our little rain garden helps mitigate some of our excess rainwater from the gutters’ downspout reaching Beargrass Creek—just a few hundred feet from our house. Beargrass Creek flows into the Ohio River a few miles downstream. Diarrhena is planted along the edges of the dry creek bed and slows the overflow during “rain events.”

I love this plant. I don’t care if wholesale growers laugh at me when I beg them to try the native grass. “Are you kidding me?” they say. I tease them for pimping blowsy blooms the size of a prom corsage.

Diarrhena has non-descript flowers in midsummer and mature dull, gray-brown seeds by late September; the foliage looks like a buffalo slept on it. 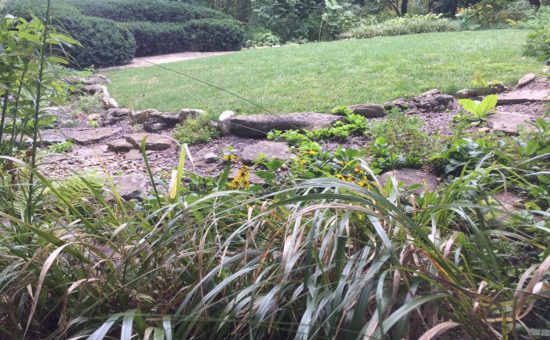 I know this description won’t stir patriotic passion, but the bottom line is this: My plants have been a weed-thwarting, bulletproof groundcover in Louisville’s shade for 15 years.

Does Diarrhena deserve to be ignored by nurseries and gardeners because of a pinheaded, heartless taxonomist? What about other helpless American outcasts like Stuckenia vaginata, Ilex vomitoria and Lobelia siphilitica?

None deserves love more than the forsaken American beak grass.

Diarrhena is your grass, America.