Linda Chalker-Scott fights for her job! Gardening information worthless to universities – unless someone else pays for it

Gardeners and garden communicators know Dr. Linda Chalker-Scott as a myth-buster, and as the Extension educator for Washington State. We know her as the author of How Plants Work and the GWA award-winning Informed Gardener, as co-founder of Garden Professors, the go-to blog for accurate information, with its 4,900-member strong Facebook group, which I recommend to people as THE most interesting plant-growing discussion on the Web.

But there’s more. In 2015 alone she also spoke at 26 seminars, wrote her next book, now in press, Gardening with Northwest Native Plants, created a curricular module for Master Naturalist certification, wrote articles for and was a contributing editor at Fine Gardening and associate editor for the peer-reviewed journal Horticulturae, and was cited in Science Citations 89 times (adding to her lifetime total of 904 – a big deal in academia).

So what a shock to learn from her that she’s being investigated for incompetence and is fighting for her job since receiving this notice on December 15 from her provost: 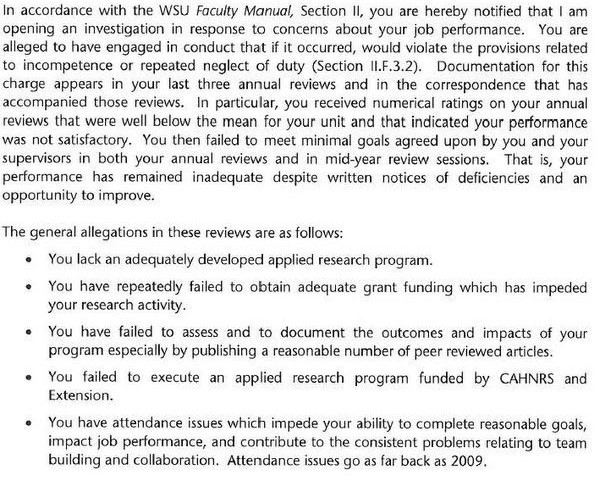 That’s especially surprising since she’s clearly being found failing at someone else’s job, not the one she’s under contract to perform:

Position Description: Position is 100% Extension. Rank and salary are open: assistant, associate or full rank depending on qualifications. The appointment will be with tenure or tenure track as appropriate. WSU Extension Specialist in Environmental Horticulture will provide educational programming in environmental horticulture throughout the state. (Excerpted from this position notice).

How could this happen, with a job description so contrary to the job they’re saying she’s failing to perform? Not to mention that she has tenure so can only be fired for gross negligence?

Linda is doing and has done more to further the mission of Extension (providing accurate gardening information to the public) than any other Extension person in the U.S. – no contest! That’s in addition to work at the state and campus level that we don’t hear about. (Source: this list of her accomplishments in 2015.)

It surprises me not one whit that Linda might have pissed off her employer in her 12 years in the job. After all, when it comes to advocating for evidence-based gardening information, she can be tough. She fact-checks anyone and everyone, including Martha Stewart and even her friends. (I know because she once corrected me, and in blunt terms, something that needed to be done.) But this is why academic freedom at universities exists: to express one’s informed views openly and without fear of retaliation.

How to Help
So now’s the time to show your support for Linda and the cause of evidence-based learning by protesting this outrageous move on the part of Washington State University.  Here’s how:

Send a letter or email to Dr. Austin (contact information below). Universities do not like bad publicity, and this is the time to let WSU know that the gardening world is watching. And if you didn’t already know, Washington State University was the birthplace of the Master Gardener program. What an ironic and sad statement that they now seek to terminate a faculty member whose expertise is crucial to these and other gardeners.  Please do it before the end of February, or it may be too late.

Also, contact any media outlets you think may be interested in the issue, especially any in Washington State. Thank you!