In Louisville, Who Will See the Canopy for the Trees?

Louisville, Kentucky is on Fodor’s 2015 travel “Go List.”  Forget about Antarctica and Iceland. You want a hot spot? My hometown is unquestionably the hot spot among the top 25 travel destinations.

Louisville ranks among the Top Five cities in the country with hottest urban heat islands. Some Louisvillians would rather the heat island distinction go unnoticed, particularly since the ambient temperature difference between the city center and the outlying countryside is rising faster than anywhere else in the nation.

There’s a way out of this, but it’s complicated.

Louisville has lost hundreds of thousands of trees over the last seven years, but 19 might soon be saved. Yes, 19. 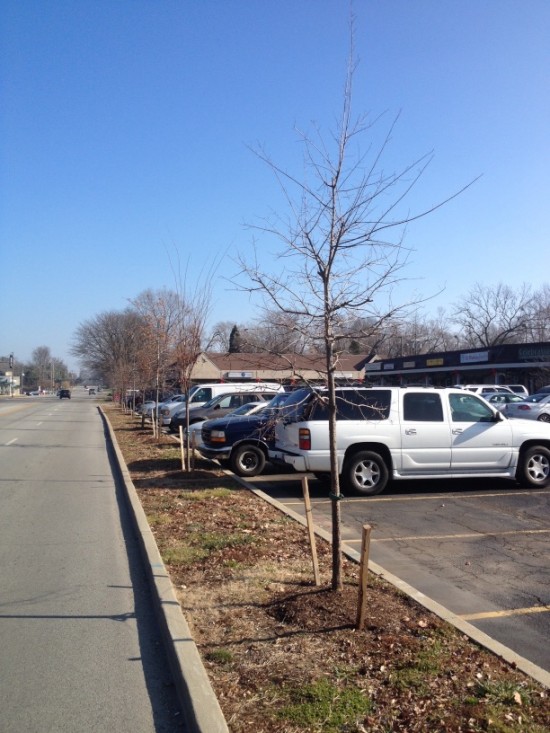 Brownsboro Road trees waiting on a settlement with the Kentucky Transportation Cabinet.

Trees—lots of them—are a part of the discussion for cooling our city. Louisville’s tree deficit is worsening in spite of current tree planting in parks, along parkways, targeted public spaces and on private property.

Remnants of Hurricane Ike, followed by a devastating ice storm four months later, and general neglect have clobbered Louisville’s tree canopy since 2008.  The city has suffered an estimated 9% tree loss in parts of city while the emerald ash borer is assaulting all neighborhoods. 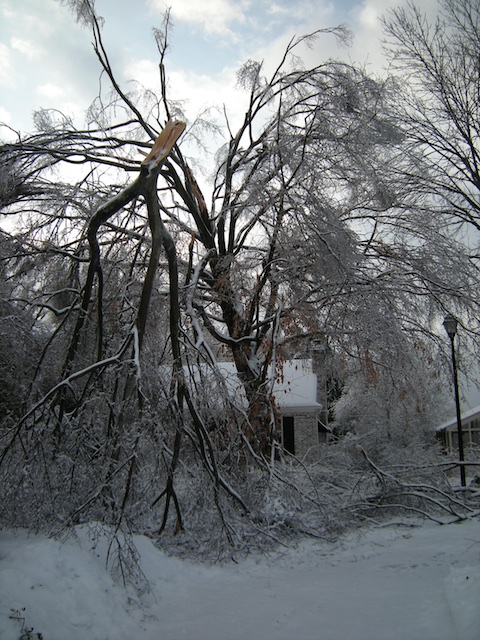 2009 ice storm on my Louisville street.

The Kentucky Transportation Cabinet has not been making it easy. In early December they threatened to remove 19 newly planted zelkovas and oaks. They insisted that the trees were planted too closely to Brownsboro Road. (It must be easier to pick on young trees since there are mature trees all over town that are planted just as closely to roadways.) The highway department also argued that there was another worrisome hazard. Trees keep roadways wetter, longer. So if you’re following their logic: trees and rain are vehicular problems. 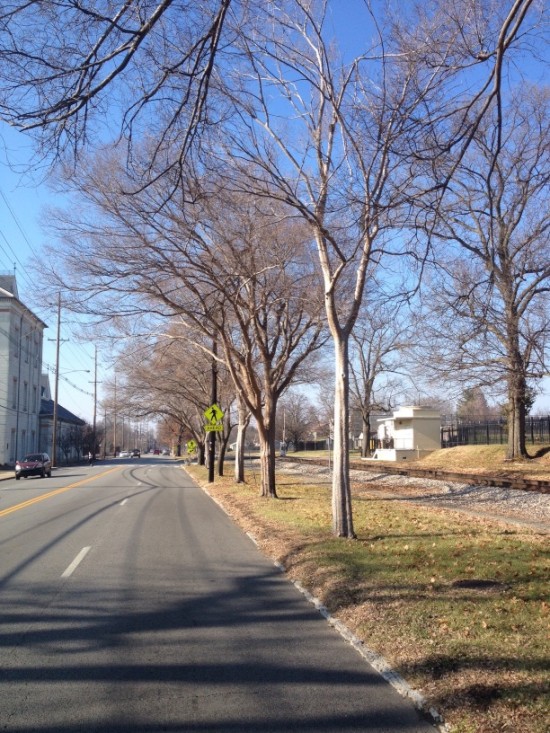 Trees close to the curb on Frankfort Avenue.

The mayor’s cautious spokesperson, Chris Poynter, who must drive to work on good rain tires, showed no willingness, to step up in defense of these trees. He said, “We completely respect the safety issue, and we do abide by their [state] rules.”

There was a glimmer of hope a few days before Christmas. The highway department agreed to a one-month delay in order to try to find a settlement on the trees.

Saving the trees could be a turning point in the continuing loss of Louisville’s tree canopy.

Much more is at stake.

Can Louisville change lanes and plant hundreds of thousands of trees, then provide for their care? How about a million or more? 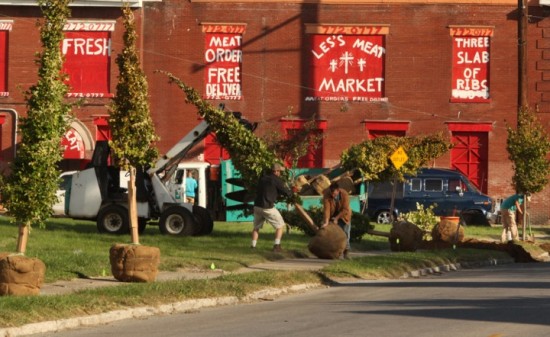 Expanding and strengthening the urban tree canopy can produce cost savings and a healthier environment. Some will argue that parts of Louisville have a very high percentage tree canopy already. So will the noble justifications of carbon sequestration, reduction of storm water runoff and cooling the urban heat island, in other parts of Louisville, prove too complicated and expensive to sell to an uncertain public.

We can brag about Bourbon and basketball. Yet neither registers on what businesses considering a move to Louisville value most: our tree-filled parks are one of the top drawing cards.

The Metro Parks landscape crew, led by Mesude Duyar Ozyurekoglu, has been planting a wide diversity of trees along the Olmsted-designed Parkways to replace old pin oaks. 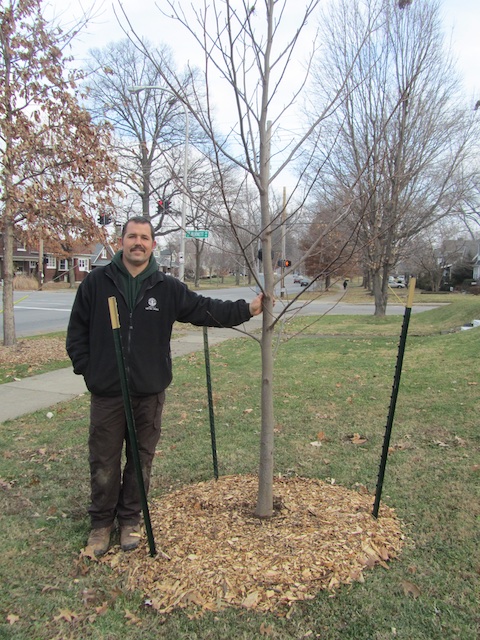 The Parklands of Floyds Fork has been planting trees and shrubs since breaking ground in 2011 on “the largest fully funded metropolitan parks project in the country.”

Valerie Magnuson and Louisville Grows have planted trees in the last two years.

So have Erin Thompson, Louisville’s urban tree forester, and Brightside.

Eco-Tech, the solid waste management company has pledged 10,000 trees, to be planted regionally, over ten years.

Mike Hayman, retired Courier-Journal photographer and tree activist, has planted trees on his own and with the collaboration of others throughout his Seneca Gardens neighborhood, in gardens, parks and along public rights of way. Hayman’s projects have engaged multiple ad hoc team members. Each tree planting has a different combination of donors and stakeholders. 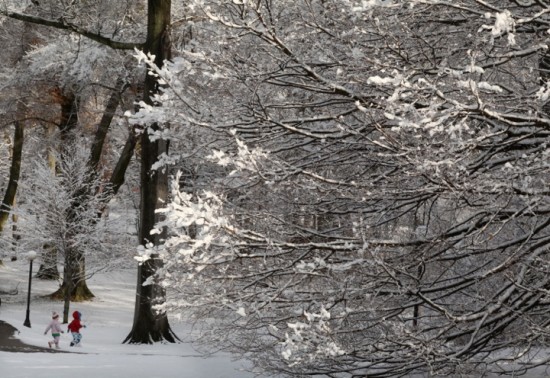 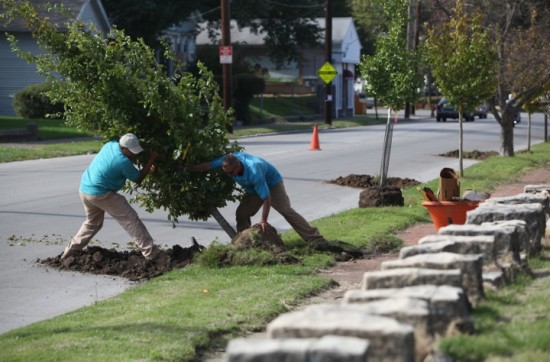 A shortage of money and political leadership are persistent Louisville problems. We have historic parks, but the can has been kicked around the parks and down our parkways for a long time. John Charles Olmsted, nephew and adopted son of Frederick Law Olmsted, complained in 1915 that Louisville’s parkways were “inadequate.” He blamed it on a “lack of power and money to do what should have been done.”

The mayor has been waiting while the Metro Tree Advisory Commission talks to stakeholders and compiles information. He won’t be able hide in the shade much longer.

A comprehensive tree study conducted with public and private funds will be released soon. It is not hard to anticipate what will be recommended: more trees.

A large scale tree planting will require political capital. The city can’t do it alone. Mayor Fisher will need to go out on a limb and help raise money and lead a coordinated public-private effort.

But Mayor Fischer is not sending out promising signs. He is hampered by budget restraints and political ambitions. The mayor must decide whether it makes sense to do some heavy lifting.

Louisville was officially designated a “Compassionate City” in 2013, so perhaps this is where hope and prayer figure in.

If we have any hope of cooling down, Louisville’s trails, roadways, landscapes and barren spaces can’t be planted at the current rate. A strong, coordinated, well-funded effort will be needed to plant and maintain new trees.

Mayor Fisher will weigh the political cost-benefits of leading a bold initiative for increasing Louisville’s tree canopy. I hope the mayor refuses to kick the can down the parkway for another 100 years.

Allen Bush is on the Board of Trustees of Louisville’s Olmsted Parks Conservancy.