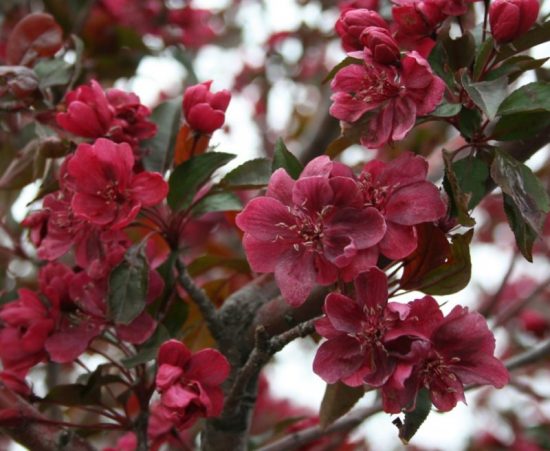 Please listen to ProfessorRoush:  you must plan your garden carefully rather than submit to the whims of spontaneous plant purchases and spectacular momentary blooms!  Science suggests that in an infinite number of parallel universes, almost anything can happen. I’m sure, therefore, that somewhere out in the gardening universe, there exists a gardener who plans everything on paper, circles and borders and hardscapes each perfectly sized, and that mythical gardener later proceeds to shop for that clump of ‘Stella de Oro’ or that purple barberry planned to provide just the right size and color blob for each spot on the plan. It’s even conceivable that in one of those infinite parallel universes, there is a ProfessorRoush who plans his gardens before he plants. In the rest of those infinite gardens, however, there is a crabby ProfessorRoush who planted too many purple-leaved crabapples.

Like many great artists and gardeners, I have evolved through a number of creative periods; my bedding plants phase, my daylily extravagance, the iris collection mania, the weeping evergreen saga, and my ornamental grasses affair. My most notorious fleeting passion, however, was a “purple-leafed tree” period, which resulted in an entire front landscaping dominated by dreary dark-burgundy blobs, all individually beautiful, but collectively presenting a distressing and depressing display. You all know how it happens. In early spring, a local nursery seduces you with a ‘Royalty’ crabapple, whose perfectly beautiful pinkish-purple blooms are shown above. Those claret, delicately-veined blooms are gorgeous, aren’t they?  The fact that the plant will have burgundy leaves throughout the summer only adds to its theoretical interest and garden usefulness. Price doesn’t matter, we must have it! 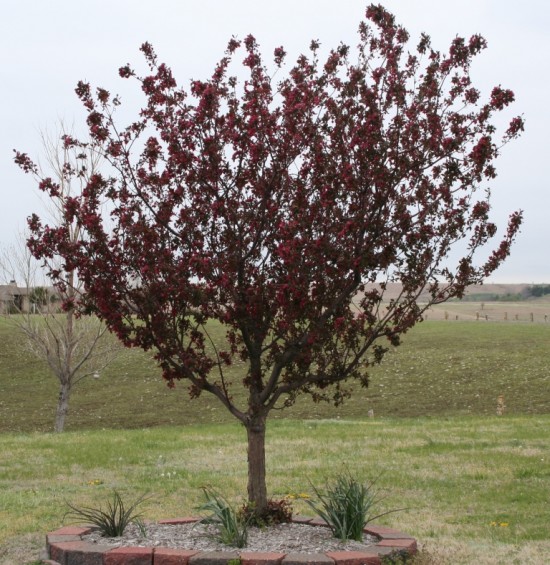 Unfortunately, those burgundy leaves serve as an uncontrasting backdrop for the burgundy flowers and from over a few feet away, the flowers disappear into the foliage. Witness the tree in full bloom (above). Now you’ve just got a dark, dirgeful blob in the lawn, and you’re never sure when the plant is in bloom from a distance. Deep in your addiction phase, now add in a similar ‘Red Baron’ crabapple purchased before you’ve learned your lesson, and a ‘Canada Red’ Prunus candedensis tree with purple leaves, and a Fraxinus americana ‘Rosehill’ Ash whose leaves turn burgundy in the fall, and you’ve accidentally created a doleful landscape in purples. Thankfully, a copper-red ‘Profusion’ crabapple died under my care as an infant tree and the ‘Canada Red’ has since enlisted the Kansas wind in an assisted-suicide pact, both proof that God exists and is attentive to foolish gardeners.

A little variety, friends, goes a long way in a garden, and so does a little hard-won wisdom. We’ve all done it, and those who missed their purple phase likely just substituted a white phase centered around Bradford pears or suffered some other colorful catastrophe of their own making. Although I later succumbed to a minor “shaggy-bark” tree infatuation that caused a smaller area of my landscape to appear as if massive dandruff had afflicted all the trees, I learned a substantial lesson during my burgundy fiasco and have since added maples and oaks, magnolias and sycamores, and cottonwoods and elms to the garden. Given age and actuarial tables, I may never see the mature outcome of these efforts, but perhaps, someday, my landscape may look more like a planned garden and less like a watercolor scene created by a two-year-old with a penchant for purple. I still don’t have a garden plan, and I’m still subject to spontaneous purchases, but I persevere with the knowledge that time and nature will help correct my mistakes.