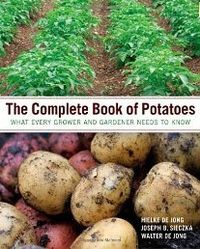 That would be me!  Potatoes are just about my favorite crop.  They are famous for yielding the most food in the smallest possible space, why is one explanation for why the land-poor 19th century Irish became so dependent on them. They are very forgiving, producing early, late, everywhere in between.   And homegrown potatoes are creamy and delicious.

So, it was with pleasure that I flipped through The Complete Book of Potatoes: What Every Grower and Gardener Needs to Know by Hielke De Jong, a retired potato breeder from the Agriculture and Agri-Food Canada Potato Research Center; Joseph B. Sieczka, Cornell hort professor emeritus; and Walter De Jong, of the Department of Plant Breeding and Genetics at Cornell.

Publisher Timber Press outdid itself here.  This is a beautiful book with lots of useful photographs, including those of various potato diseases, which will occasionally trouble even the most easy-going home grower in a wet year. There are photographs of different varieties–to be expected–but there are also photographs of the potato in art and of outrageously colorful and wildly shaped cultivated potatoes from the potato’s birthplace in the Andes.  Let’s get some of THOSE varieties over here.

And while the growing instructions seem a little constipated in way that suggests a greater familiarity with the needs of commercial growers than happy seat-of-the-pants gardeners like me–i.e, worry about pH even though potatoes will grow in a wide range of soil types–the real delights of this book are in its panoramic consideration of the potato.

I learned all kinds of things I did not previously know, such as…

1.  If you intend to store potatoes, the skin will toughen up if you leave them in the ground for at least two weeks after the vegetation dies.

2. Half of the world’s potato crop winds up in processed foods.

3.  Wild potatoes are full of toxic glycoalkaloids that make them taste bitter.  (The glycoalkaloids have been bred down to acceptable levels in domestic potatoes, but are concentrated in the green tissue of tubers that have been exposed to light.  That’s why we hill potatoes–to keep them shrouded.)

4.  In the Andes, where the potato is native, people dealt with the glycoalkaloids by eating a special clay that binds to them, or by leaving potatoes outside in freezing weather and then trampling and washing the glycoalkaloids out of them, creating a freeze-dried product called chuno.

5.  Colored potatoes contain additional nutrients, including antioxidants, so if you can do blue or red, why not?

6.  The authors make growing potatoes from actual seed, called TPS or “true potato seed”–rather than from “seed potatoes”–seem like a reasonable proposition.  Of course, you’ll be getting the product of sexual reproduction in that case, so you’ll have to do without the genetic uniformity of tubers.  But seed tubers are expensive!  I’d rather not spend the $30 or $40 I spend on them every year.  The only source I could find, however, for TPS is here.