Cluck – From Jungle Fowl to City Chicks, a Review 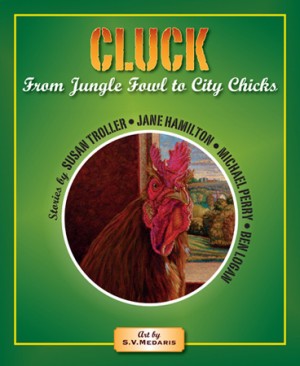 Years ago, I very much wanted a piece of chicken art by S.V. Medaris, but I couldn’t afford it, so I bought a t-shirt instead. That t-shirt now has a hole in it, and some paint splattered on it, which is proof that I wore it endlessly. Sue (she goes by S.V., but her name is Sue) Medaris is an extraordinary painter and printmaker who has a way of capturing chickens in all their absurdity and charm.

So imagine my excitement when Cluck: From Jungle Fowl to City Chicks arrived and I found out that Medaris had illustrated it. Chickens have been her subject for so long that she was able to come up with art that depicts every aspect of chicken life—and chicken death. You’ll see prints and paintings that show a possum invading a coop, a rooster intimidating a hen, and a hen committing the ultimate taboo—which they will do sometimes—and eating her own egg. It’s not nearly as graphic as it sounds; it’s just bold and beautiful art depicting the real lives of real chickens.

So the art is reason enough to get the book.  But you’ll also get a lovely collection of personal essays that cover author Susan Troller’s own experiences with chickens, plus contributions from Jane Hamilton (yes, that Jane Hamilton) writing on the relationship between cats and chickens, and Michael Perry (yes, that Michael Perry, of Coop and Truck and Off Main Street and other literary gems I suggest you go investigate right this minute if you haven’t already) writing on how to hypnotize a chicken.  I have often read that you can hypnotize a chicken using Michael Perry’s method, but I’m afraid to try it myself. What if the chicken never wakes up?  It just seems like too much responsibility.  But you can try it, and Michael Perry will tell you how.

The other contributor, Ben Logan, might be less familiar to you if you don’t live in Wisconsin, but he’s the author of The Land Remembers: The Story of a Farm and Its People and a number of other books, and he contributes two pieces on eggs.

There are so many chicken books out this year—too many, maybe—but there are not nearly enough literary chicken books, and there are definitely not enough illustrated by S.V. Medaris. It’s going to take a little work to find this book—it’s published by a small press called Itchy Cat Press—but I suggest that, rather than order it online, you stop in at your local independent bookseller and see if they can get it for you. That’s how small books find their way in the world:  they come to the attention of small booksellers, usually because their customers ask about them, and pretty soon they’re putting them on their shelves and they’re selling all over the country.

Which brings me to the one quibble I have about this book.  At 10.5 inches tall and 8.5 inches wide, it’s sized like an elementary school workbook, not a charming work of literary and artistic merit. It doesn’t fit on standard bookstore shelves, and the combination of the size and the cover design make it look more like a self-published book. That’s a shame, but don’t let it stop you. Cluck is a worthwhile experience regardless of the packaging.