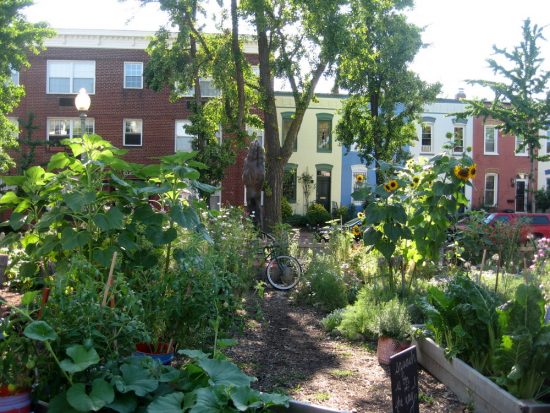 In New York City, every square inch of space is scrutinized, and land use discussions often devolve into war games. Community gardens, unique uses of open and green space, are not spared such critical examination.

NYC’s current generation of community gardens emerged during the 1960s through the 1980s, as residents reclaimed abandoned properties—many of them city-owned—from trash and crime. They were “defiant gardens;” Kenneth Helphand devoted a chapter to them in his book of that title. Gardens became centers of activism, bringing neighbors together to heal their communities.

While property values were low, the City didn’t much care.  During the 1990s, property values rose, and the City began bulldozing gardens in earnest. In 1999, then-Mayor Rudolph Giuliani put 113 community gardens up for auction as “vacant” lots for “development.” The City had tens of thousands of other vacant lots and empty or underutilized properties.  In response to protests against the sale, Giuliani declared “the era of communism is over.” More than a sale of public property for private profit, this was an assault on the gardens’ communities.

Garden activists succeeded in blocking the auction, leading to a 2002 Settlement Agreement preserving some of the gardens for eight years. Even with the settlement, hundreds of gardens have been lost. The settlement protected only 391 gardens of the 838 gardens. A recent census lists only 483 gardens.

The newly-formed New York Restoration Project (NYRP) purchased 51 of the gardens put up for auction in 1999. But NYRP, in partnership with Target, has converted nearly all of its community gardens into parks, razing vegetable beds for lawns and ornamental borders, replacing community stewardship with corporate sponsorship. Now that Target is closing its garden centers, what will become of NYRP’s gardens?

The 2002 settlement agreement expires this September. For nearly two years, the New York City Community Gardens Coalition has been negotiating with NYC’s Department of Parks and Recreation (Parks) and Housing Preservation and Development (HPD) to ensure protection continues. However, nowhere do Park’s and HPD’s proposed new rules mention “preservation.” However, “development” features prominently, reflecting the interests of billionaire Mayor Michael Bloomberg and his supporters. Once again, NYC’s community gardens are threatened for the sake of private profit.

NYC’s community gardens occupy a scant 120 acres, in contrast to more than 27,000 acres of parks. NYC’s green space per capita is lower than any other major U.S. city. A community garden should be win-win for a neighborhood, right? Who could hate a community garden? “There is not a universal love of gardens,” according to Parks Commissioner. 52% of today’s gardens are under Parks jurisdiction, and all community gardens must register with Parks’ GreenThumb program. Anyone else feel like this is the fox watching the henhouse?

New Yorkers for Parks Open Space Index classifies community gardens as “passive” open space, in contrast to active spaces such as sports fields and playgrounds which “offer places for recreational sports, exercise and play.” I argue that community gardens are active uses of open, green spaces. They are participatory, offering opportunities to engage in activities—planting, weeding, harvesting—for which one would be arrested for performing them in a public park. They provide unique benefits that are not available from other types of open space. This is where “garden” no longer need be just a noun: a place, static, passive. Community gardens are where “garden” becomes the verb. Let’s make sure they stay that way.