Love Song For A Parsnip 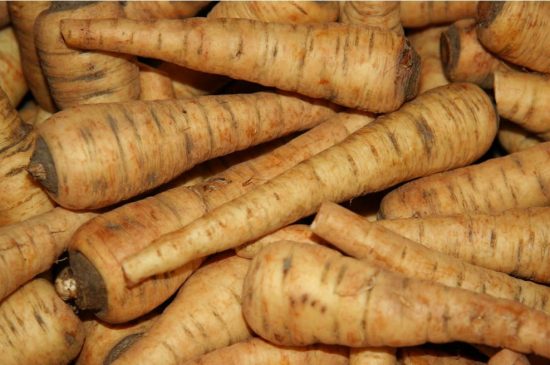 I was talking a few weeks ago with the editor of a gardening magazine, who asked me what had really excited me in my vegetable garden in 2008.  My answer meandered through turnip greens, tatsoi, and Pineapple tomatoes, before ending on one emphatic note: parsnips!

“Wow,” he said carefully, as if handling an undefused bomb that might explode into gibbering insanity at any moment, “I’ve never really heard anybody get excited about parsnips before.”

Fortunately, the great Elizabeth Schneider, author of the delicious and delightful food encyclopedia Vegetables from Amaranth to Zucchini, rises to defend those of us who march to the beat of a different root.  Her parsnip entry begins:

Herewith another valuable vegetable that is perennially ignored–the more so in our time, when a snappy moniker and flashy looks may get higher scores than usefulness and fine flavor.  The name sounds goofy, but no sillier than pumpkin or zucchini, which are both taken seriously….Then there is parsnip’s appearance, frumpy and pallid. But once we get past these superficial matters, there is parsnip’s flavor: complicated, intense, sophisticated–a flavor to be proud of!

I’d add just a few more words: sweet, creamy, starchy, but with a punk edge that no winter squash would ever dare attempt.

According to Schneider, parsnip was a staple crop in Europe until it was made obsolete by the arrival of the potato from the New World and the increasing availability of sugar…obsolete for everybody except those few of us who cannot imagine anything more delicious than a food that combines the two effects.

Since then, the parsnip has drifted in and out of obscurity, and most seed companies offer only two or three varieties.

Parsnips are a carrot relative, and grow somewhat similarly, with an even more dramatic transformation from tiny seed and spindly seedling in spring to robust and powerful plant by the end of summer, with leaves that stand two feet high and roots that in my garden grew as big as five inches in diameter.

I planted my first crop very early last year, with the peas, as per instructions.  Though parsnips need a long growing season, I think the seed could conceivably go in a little later, because a lot of my roots grew bigger than is ideal. (While the flavor was still great at five inches across the top, the texture was a little spongy.) I mixed parsnip seed with radish seed, with the idea that the radishes would serve as fast-growing nurse crop to help space them.  This worked well.  When I pulled the radishes, the parsnip plants actually stayed put.

I planted a pretty big bed, probably about 3 feet by 16 feet, and was typically lazy about thinning, my least favorite vegetable garden chore.  Parsnips seem less fussy about this than carrots and turnips, whose roots simply will not bulk up if they are crowded at a certain stage of their growth.  Parsnips, on the other hand, have such muscular shoulders they seem to simply shove each other out a bit to make room.

Here’s the thing about parsnips, and the explanation for why the bagged ones in the supermarket don’t taste like much: They really need to experience some hard frosts to convert their starch to sugar and their flavor to magical.  I waited until November to harvest mine, and then hacked a bunch more out of the snow in December.  But I left at least half in the ground on the advice of a friend.  Parsnip is the rare vegetable that will hold over in the garden in my part of the world. Spring parsnips–which should be dug early, before this biennial thinks about sending up a stalk and going to seed–are reportedly as sweet as candy.  Since we don’t get to harvest anything in upstate New York before mid-May, being able to pry such a tasty vegetable at the peak of its flavor out of the ground in March sounds like a reason for a party.

My fall crop, I’ve been storing in sawdust, in plastic tubs, in the stairwell between my basement’s ill-fitting Victorian-era door and the Bilco doors on my patio. They are not just keeping beautifully there, they are getting sweeter in storage, tasting better every time I roast them.

In her encyclopedia entry, Schneider offers recipes that include “Parsnip-Carrot Soup,” and “Parsnip, Potato and Squash Puree with Nutmeg,” but my feeling is, why insist that the parsnip tamp down its personality in order to fit in with the rest of the root vegetable crowd?  The suggestions in her “Pros Propose” section, where chefs offer their ideas, sound much more interesting, including chef Robert Bagli’s pairing of parsnips and scallops.

At this point, however, I have to make a confession: I am an adventuresome cook, but I have only cooked parsnips one way so far: cut into finger-sized slices, thrown onto a well-oiled pan, drizzled with a little soy sauce and roasted for 15 minutes at 425 degrees.  I’d like to move on to other recipes, but I CAN’T.  Roasted parsnips are so good, I haven’t yet had my fill of them.  It’s possible that despite my best efforts I never will.