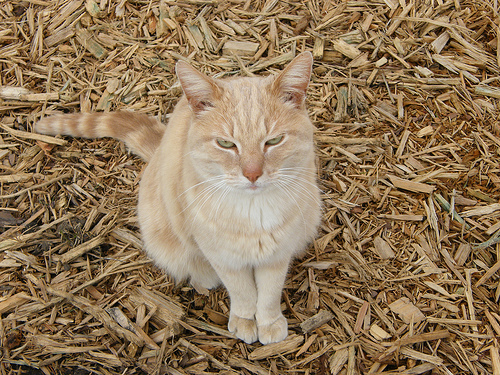 My local gardening Yahoo group is debating the often-repeated warning that “wood chips will tie up all the nitrogen in the soil and will lead to an irreversible manganese build-up,” with two professional gardeners agreeing and declaring they use it on paths only.  A third then added, “If used near plants, you have to add nitrogen to compensate…Heard this years ago from Dr. Gouin, U. of Maryland.”

Now locally, this Dr. Gouin is considered quite the horticultural sage, but from across the continent comes advice from another Ph.D.-packing expert with an entirely different take on this subject.  Linda Chalker-Scott, a professor at Washington State University, writes in “Arborist wood chips mulches – landscape boon or bane?” that the notion that wood chips will lead to soil nitrogen depletion is wrong.  She notes that a thin zone of nitrogen loss exists where the chips touch the soil, but that for woody plants with subsurface roots, there is no nutrient loss.

Now this IS confusing because I’m a big fan of Linda Chalker-Scott myself, as is sustainable gardening author and frequent Rant commenter Ginny Stibolt.  But then Washington Gardener editor Kathy Jentz wrote:

I’ve just returned from garden touring in Portland OR and speaking with nurseries there about their cultivation techniques.  The mulch in the Pacific Northwest is all pine bark — that is what they have in abundant supply — whereas our cheap/free mulches here are hardwood mulches.  So the real question is what “mulch” Linda Chalker-Scott at Washington State University was testing and working with.  I’m guessing she was using the pinebark one that is a staple of the Pacific Northwest and very probably did not consider that we in the Mid-Atlantic (the OTHER Washington 🙂 might not be using the same one.

Thanks, Kathy, for offering what might just be the explanation for these conflicting positions.  Now let’s throw it open to GardenRant readers to weigh in and either clinch the question once and for all – or muddy it up even more.

Oh, and how about that “irreversible manganese build-up”?  Do wood chips really do that and if they do, is it as dire as it sounds?

Photo by Tale Kinker via Flickr – because we just don’t have enough cats on this here gardening blog.