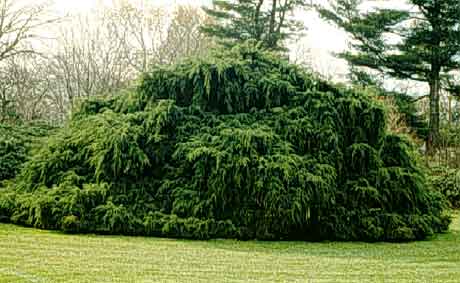 Tsuja canadensis, considered the redwoods of the East, range from Georgia to New Brunswick and west to Wisconsin.  The tallest are 170 feet and the oldest 600+ years old.  And according to the New Yorker, they create whole ecosystems.

Hemlocks create deep shade and cover the ground with beds of needles, altering the temperature, moisture, and chemistry of the soil around them, and creating a distinctive habitat for certain animals and plants.  Some ecologists believe these coves contain – or, until recently, contained – the last examples of primeval rain forest in eastern North America.  Only small fragments of old-growth forests remain in the East.

Foresters started worrying about them in the late ’80s, when stands of hemlocks were discovered to be 90 percent dead, turned into “groves of sunbleached ruin by the adelgid”.

Wooly but Not Cute

Seems that a wealthy gardener in my hometown of Richmond, VA is responsible for a whole lot of destruction.  What’s now Maymont Park was the first garden to import evergreens from all over the world, including at least one that carried a hemlock-killing insect, the wooly adelgid.  A single female can generate as many as 90,000 clones of itself in a year.

Can Hemlocks be Saved?

Plenty of people are concerned, like The Friends of the Smokies.  They have a small lab that’s breeding a kind of lady beetle native to Japan that eats woolly adelgids, and it’s shown promising results.  But it’s waaay underfunded, so don’t expect that lady beetle to arrive on the scene Laura Croft-like and rescue thousands of trees.  And haven’t we learned lessons about importing one species to solve problems caused by other imported species?  How do we know it won’t cause other problems?

Then there’s an insecticide treatment called Imidacloprid brought to us by the folks at Bayer.  It’s injected into the soil around the root system of hemlocks, where the adelgids suck it into their bodies and die.  It’s an artificial kind of nicotine with one big advantage: it migrates very little through the soil and degrades quickly in sunlight.  However, it kills not just adelgids but many grubs.  Here’s one expert’s reaction: “I wouldn’t want to see chemical treatment be the only way to save hemlocks, but nothing else is ready right now.”  And this one: “Either you get some invertebrate kill around the treatment site or you get an ecosystem collapse – that’s the choice.”  That’s some crappy choice!  And the hemlocks that are successfully protected by this product need to be re-treated every few years.  So “what you get is a forest on life support.”  And funding for hemlock-saving measures competes with demands for fire-fighting monies – something no worthy program should ever have to compete with.

I know it’s not a big deal like the death of whole forests, but I’d sure like to save the 5 Canadian hemlocks growing in my garden, so if I see symptoms I’ll start using that pesticide or spraying with oil every year.  Actually, after they get too tall to spray, the only option would be injecting that insecticide into the soil, so a few grubs may have to be sacrificed to save the trees.

The New Yorker piece went on to compile this horrifying list:

Now just reading about hemlocks was enough to turns me into a “close-the-borders” anti-immigrant crusader, so this list is pure pile-on.  Tancredo for president!

But seriously, the death of hemlock, if it were to happen on one day, would be the 9/11 of the plant world.  We’d turn against all imports, not just plants, because one of those killers came here in packing material.

By disposition I’m inclined to favor inclusiveness and open borders, but the plight of these trees makes me totally understand the demonizing of “alien” plants.  I’m heartsick, too.  And the solution is?