Jeff Ball on the Past, Present and Future of Gardenwriting 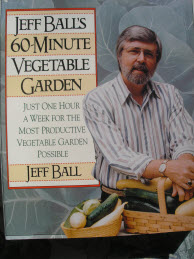 Just so you know, Jeff Ball is the veteran gardening (and yardening) educator of stage, screen and print (8 years on “The Today Show,” no less) and GEORGE Ball is the owner of Burpees.  After confusing these guys for years, I
finally have it straight.  Jeff’s the guy whose site I’ve consulted many times for gardening advice, especially about lawn care, and whose advice always ring true.  Add to that his unofficial role as dean of American gardenwriters and you can see why I asked for some serious phone time with him.  Lucky for me, he’s easy.

HOW A GARDEN EDUCATOR GETS STARTED
After 13 years in state government (PA Department of Welfare), Jeff solicited the publishing upstart Rodale with a book idea, they responded by asking him to write a book about suburban homesteading, and he up and quit his day job to pursue a career in gardenwriting.  The career leap paid off and he now has 8 books under his belt, mostly for Rodale, with over a million copies sold.  His mission to teach gardening extends to public speaking, training Master Gardeners and producing videos, all of which he now says he’d like to throw away because they’re outdated.  Yes, that’s the thing about garden writing; best practices evolve with more and better information and Jeff says he loves that about the field and is excited by the changes.  In fact, he opines that a full-time garden writer is first and foremost a student.  Hear, hear!

STOP THE PRESSES
Jeff filled me in on the progression of gardenwriting since he started in the early 70s.  It was a prestigious,
mortgage-paying career then, with about 100 people making a real living at it, including the full-time gardening editors at all the major newspapers.  But by 1990 everything was changing and today it’s common for newspapers gardenwriters to make $25-50 per column, obviously with no benefits. Newspapers are starting to demand that their gardenwriters add video, podcasts and blogging to their duties to accompany their columns – usually for no extra pay – in an attempt to beef up their websites. “I don’t think there is any question that the newspapers will try to find new ways to monetize our columns without our getting any share.”  The newspapers “know they are dying but have no clue how to make real money via the website.”

More changes on the horizon?  “I suspect that in a few years, when we write a column about roses, all the garden centers in the area will be able to set up links to the column advertising their roses.  You put in your zip code and
get the three closest garden centers to you.  For that, the garden centers pay a fee to the newspaper.”

GARDENING BOOKS
According to Jeff, sales are way down, with most books selling in the 20,000 range.  Why?  Mainly because the market is saturated (“How many more books about perennials do we need?”) but also because of the decline of gardening in the general public.

GET THEE TO THE INTERNET
As Jeff recently wrote to the GardenWriters Listserv: “We should assume that just about everything we garden writers do now to make a full or part-time living is going to be different within the next five years because of new developments on the Internet.  I think we have to take a proactive approach to that change.  If we get defensive every time another change appears, we might lose out in the long run being able to take advantage of the new technology.  Sort of like the photogs still using 35 mm film.  It can’t last forever.” Writers are scrambling to get on line because there’s “serious money” starting to be made there, says Jeff.

So as one of those long-time print writers, what does Jeff think of blogs, anyway?  Well, I loved this – he predicts that the most successful blogs will be the controversial ones who go after the “conventional wisdom,” even criticize products, something gardenwriters have been “scared to death” to do.  He’s a regular reader of GardenRant and finds it “provocative.”  Lord knows we try.

ADVICE TO NEW WRITERS
I’ve always been impressed by the generosity of gardenwriters toward each other, and Jeff tells me I’d really see it in action at their big annual meet-ups and he wouldn’t miss a one, even if it’s in Oklahoma.  (No offense, Okies, but a gardening mecca it’s not.)  And whenever he’s around other writers he finds himself mentoring newbies because they’re pretty clueless about how to make a living at it and after all, we’re not in competition with each other, are we?

Good question.  Of course writers seeking newspaper column gigs in their home towns aren’t competing with others around the country but what about on the web?  Aren’t blogs and sites all in competition in the new flat world?  Jeff says no, not even on the web, but I’m not convinced on that score so readers, what do you think?

More Jeff Ball advice: do favors, make no enemies, and keep informed.  And this: “Writing is a lonely profession.  People who succeed work their butts off and there are no accidents.”  Good mentoring, Jeff.

TEACHING GARDENING TO THE PUBLIC
Okay, enough career stuff. Let’s look at ways of educating the public in gardening, especially in the use of more earth-friendly practices.  Jeff’s been in the trenches fighting the good fight for decades now, using every medium available, and his target audience has not been the rarified world of gardenblog readers. Oh, no, his target audience is the yardeners of the world.  I know that’s a controversial term here on the Rant, but they’re his
peeps!  Oh, I’ll just let Jeff explain:

The public at large includes about 15 million people who are gardeners at some level; 50 million yardeners who don’t think of themselves as gardeners but have plants to care for including lawns, shrubs, and trees.  Then there are maybe 10 million who have their property taken care of by someone else.  The rest live in apartments and condos with no land.

Understanding soil and its relation to plants is a problem for gardeners.  Yardeners don’t even know what roots do or that a plant might need full sun or part shade.  They just want instant success.  And most people do everything wrong.

Yeah, it’s an uphill battle.  But I’m convinced that meeting clueless homeowners where they are and leading them forward into 21st century “yard” practices is the way to have the most impact.  Jeff’s approach of giving them “opportunities, not rules” sounds right to me.

YOUR LIMO WILL PICK YOU UP AT 5 A.M.
Okay, enough depressing news about the state of gardening knowledge in the general public.  What was it like appearing on the Today Show?

I did one show a month, always on a Friday.  I did my own production, and they always agreed with my topics.  I left Philly on Thursday afternoon to have time in the NBC studio to set up for the segment, which usually took only a couple of hours, then off to any restaurant of my choice and a
night’s sleep in a fancy hotel.  At 5:00 a.m. a limo came to pick me up and drive the terrible long distance of 5 blocks.  Rehearsal took about 10 minutes and my segment was almost always 4.5 minutes, with about 6 million viewers.  Was usually home by noon.

Nice gig if you can get it.