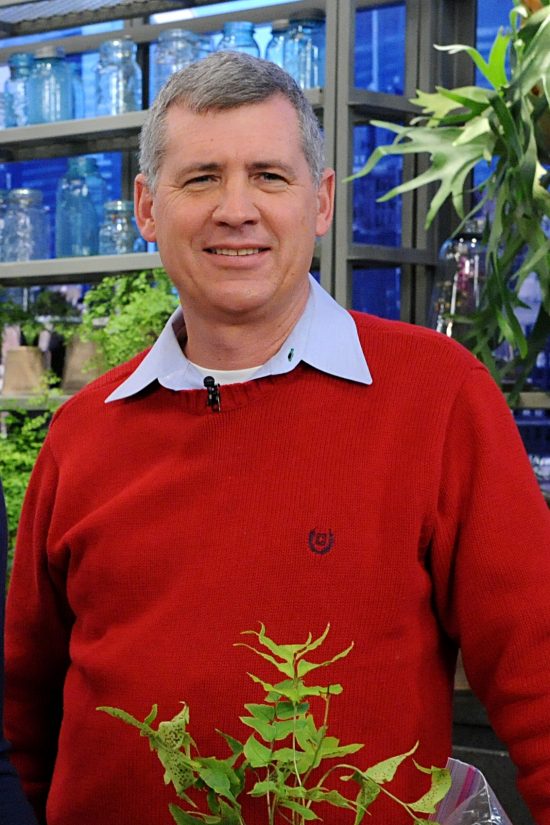 When you read through the visitation instructions on the Plant Delights website (extensive, informative, occasionally hilarious), there are categories for gardeners with impatient spouses (allow 60 minutes, more if you tie them to a tree), beginning master gardeners (90 minutes including shopping), and plant nerds with no life (3-10 hours). They don’t have a category for a sunburnt vacationer on her way back from the Carolina shore with several friends in tow, and twelve hours of travel ahead. That was my category when I finally visited this nirvana of leafy cultivars last weekend, and I felt lucky to make the stop, however brief. But my luck didn’t stop there.

I was also fortunate enough to spend a few minutes with Plant Delights/Juniper Level Botanic Gardens proprietor Tony Avent, who was mingling unheralded with all the other perspiring but invariably delighted visitors that day. In the unlikely event that someone reading this hasn’t heard of Plant Delights, Juniper Hill, or Tony Avent, this nursery-cum-show garden just outside of Raleigh, North Carolina is one of the top spots for the propagation and mail-order sale of unusual perennials, only to be compared with such venues as the late, lamented Heronswood Nursery. (Avent regularly goes on plant hunts to exotic locales with Heronswood founder Dan Hinkley.)

Plant Delights is known for an amazing selection of nursery-bred hostas, elephant ear, salvia, trillium, agave, and much more. Since the early eighties, Avent has been bucking big-box trends, offering leafy tropicals for outside garden use before anyone else was thinking about it and traveling yearly to locales like Thailand, Vietnam, and South Africa in search of cool plants. All the plants are propagated and tested in the Juniper Level gardens, where Avent tries his best to kill each one. As he said in a New York Times piece last year, “If we found it in a wet, shady area, we plant it in a sunny, dry area.” Indeed, Avent’s saying, “I consider every plant hardy until I have it killed it myself—three times,” can be found on the back of PD T-shirts.

I now own one of these shirts as well as all the plants we could fit into the back of a fully-packed VW Passat (not many), but I didn’t make any purchases before taking a quick tour of Juniper Level. According to Avent, he had visited Wayside Nurseries as a boy, expecting a glorious show garden, but found instead “a brick building and a couple flats of begonias. I decided then that when I grew up I would have a nursery/show garden and nobody would be disappointed.” Plant Delights is not a walk-in retail operation: there are only 8 open weekends per year where one can actually visit the gardens and buy plants (check the website).

Avent explains the mission of Plant Delights this way: “The nursery exists to support the gardens. We have an extensive research program, including the only commercial trillium-producing nursery in the world and our hosta breeding program. It’s a totally different business model. My plan is to endow the gardens so they remain after the nursery is gone. For now, we want to get as many cool plants to people as we can.”
So what are the cool plants Avent is most excited about these days? Not a fan of the plant du jour mentality, Avent says, “Our whole mission is to buck trends. We don’t want a plant that you can buy in Walmart. … As a gardener—no, make that plant collector—you go through phases. We’re in a variegated agave phase right now. I found them coming out of Thailand by way of Japan, but they were originating in California. And the nomenclature was horrible. We’re trying to make ferns a trend (though people want flowers), and we’re continuing to introduce more hardy tropicals. We collect it, we grow it, and then we trial it; it often takes years before we introduce a plant for sale.”

Agaves and spectacular tropicals are very much in evidence throughout Juniper Level, a labyrinth of winding paths punctuated by waterfalls, decorative structures, and a large pond. I also noted 8-feet-high trumpet lilies just finishing their bloom cycles, magnificent dahlias, and many exotic perennials whose labels could be found at ground level.

I was particularly impressed by what I think is a Boehmeria cultivar (didn’t write down the label info).

Unfortunately, I didn’t spend nearly as much time as this garden deserves, but I did have a chance to get Avent’s views on the soon-to-be-released updated zone map (replacing the 2003 draft) and a few choice words on global warming. More on that and my top picks from the Plant Delights greenhouses in the next post.

Oh, in case you can’t read Tony’s shirt, it says “Friends Don’t Let Friends Buy Annuals.” We had a little talk about that.