Jeff Lowenfels on Compost Tea: AACT (and only AACT) is the real deal 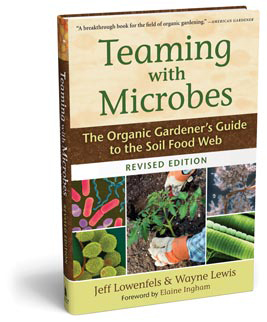 by Jeff Lowenfels, author of Teaming with Microbes

Dr. Jeff Gillman, my friend and fellow Timber Press author, is correct. I do think the definition of “compost tea” is crucial to this discussion.

When I write about compost tea and promote its use to return biology to soils, I am speaking only of “Actively Aerated Compost Tea” (AACT), a term applied to the resultant of mixing compost, humus or vermin-products with non-chlorinated water and aerated twelve to thirty-six hours (depending on the brewer). Appropriate microbiological nutrients can be added, but don’t have to be, to increase the population or size (in the case of fungi) of microbes during the process. The mixture must remain aerobic for the entire brew with O2 remaining above 6ppm the entire brew.

I am not referring to compost leachate, the liquid that oozes out of compost when it is squeezed or becomes too wet. This might have a tiny bit of nutrient value, but contains relatively few micro-organisms from the compost. This is because it takes energy to remove bacteria and fungi from the compost.

Then there is compost extract. This is not AACT. This is the stuff produced by soaking a bag of compost (or, God forbid, manure) in water for a week or more. Except for an aerobic surface, most of the biology is anaerobic with none of the diversity of beneficial, aerobic micro-biota—the hallmark of AACT. I don’t consider these safe nor do I call them compost tea.

Manure teas? I won’t even use manure in my compost, much less soak a bag of it to make a tea. Using manure for anything in the yard and garden is asking for pathogens and e. coli in particular—not to mention a great way to apply things that don’t degrade in compost like tetracycline and other antibiotics used in animal feed and on animals. I don’t advise it for compost or for AACT.

For this reason, in particular, I discount any reliance on the NOSB (National Organic Standards Board) rulings. Aside from the politics the body has played (what the government has done to the word “organics” would be a great discussion), concern about the possible presence of e. coli in compost tea is misplaced. I know of not one single case where anyone has been injured by using AACT.

However, Dr. Jeff and I agree on more than we disagree, I think, starting with a fear of using manures.

And we agree on another point: unless you add organic matter or nutrients you can’t fundamentally change the microorganism make-up of soil for the better for any significant length of time. While Jeff also notes that compost teas only supply the micro-organisms, I would add that any competent compost tea program includes the addition of “microbe foods” (inappropriately called “fertilizers”) as well as application of compost tea. Using compost tea is only part of a program to get soil biology where you want it.

Next, Dr. Jeff also notes—in my opinion, correctly—that you can add compost (and, I would add, the appropriate mulches as well) to restore life in soil that has been damaged by chemicals. But Dr. Jeff would have you wait a year to restore the life using compost. Part of his reasoning is based on fears of e. coli, which just don’t exist in properly made AACT.

While I agree compost works and is terrific to use, I would suggest that addition of active aerated compost tea (yes, along with microbial food or organic matter) will speed that process up. One teaspoon of compost has 1 billion bacteria. Compare this to the 4 billion in one teaspoon of AACT. You just need to look at soil before and after application of a soil drench of compost tea to know it imparts microbiology to impacted soils. And you don’t have to wait a year. Think about it: AACT works faster because the microbiology is not bound up in the humus of the compost.

As to the key point, I agree that there have to be lots more studies published on the impacts of AACT and let’s do it with the kind of compost, brewer and quality those that make AACT use. My big beef with most of the studies I have reviewed thus far is that I am never sure they use good compost or actually make what I define to be AACT. ( And yes, it does take a bit of effort to make a good tea so it is definitely not for everyone. Compost and mulches do a great job.)

One popular machine, for example, doesn’t add air via bubbles, but rather an impellor that cuts up all the fungi. Use tea from this machine and your studies won’t show disease suppression requiring fungi. Or how about the popular university study that actually tested their tea with Soil Foodweb, Inc and were told that they didn’t have a tea worth using. Yet they went forward anyhow. The conclusion of these should be that “AACT doesn’t work if it is not AACT,” not that AACT doesn’t work.

I am also the first to admit that there are not enough studies using real AACT and real compost to show there is a benefit to using them. Again, I am told they are coming and they will conclude as did “The Effect of Compost Extract on the Yield of Strawberries and the Severity of Botrytis cinerea” (Sylvia E. Welke Journal of Sustainable Agriculture, Vol. 25: 57-68, 2004), which states that “Aerobically prepared extracts improved yields (1.70 ± 0.08 t/ha) over the control (1.36 ± 0.11 t/ha) and water spray (1.37 ± 0.09) treatments and also reduced disease severity.”

This is not to say the stories about the use of compost tea, the home studies and comparisons that are not considered “scientific” are not extremely useful and shouldn’t continue. After all, it’s only been about eight or 10 years since folks have started to seriously use AACT and there have been vast improvements in systems and understanding the role of nutrients. Those of us involved with AACT have seen far too many “before” and “after” pictures of farms, golf courses, lawns, and vegetable gardens—and know of far too many stories of those who have rescued and then maintained gardens, farms and yards for several years now with only the use of AACT and a suitable food to sustain the micro herd. These were not parts of scientific studies, alas, but they are real life usages where real money was used. 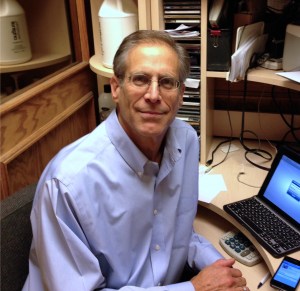 The reported successes with AACT should heighten the desire to see well-executed experiments to test and perfect what is a relatively new practice. I know they did for me and I have made and used AACT to repair years of chemical abuse in my yard. I use it on all starts and new plants and conduct experiments constantly. Add me to the voices who claim “the stuff works” based merely on personal experience. But I have to tell you, hundreds of my neighbors agree.

Let’s do the studies. However, let’s do them properly. Not any old tea is Compost Tea!